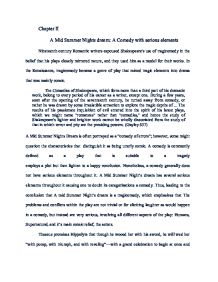 A Mid Summer Nights dream: A Comedy with serious elements

Chapter II A Mid Summer Nights dream: A Comedy with serious elements Nineteenth-century Romantic writers espoused Shakespeare's use of tragicomedy in the belief that his plays closely mirrored nature, and they used him as a model for their works. In the Renaissance, tragicomedy became a genre of play that mixed tragic elements into drama that was mainly comic. The Comedies of Shakespeare, which form more than a third part of his dramatic work, belong to every period of his career as a writer, except one. During a few years, soon after the opening of the seventeenth century, he turned away from comedy, or rather he was drawn by some irresistible attraction to explore the tragic depths of ... The results of his passionate inquisition of evil entered into the spirit of his latest plays, which we might name "romances" rather than "comedies," and hence the study of Shakespeare's lighter and brighter work cannot be wholly dissociated from the study of that in which terror and pity are the presiding powers. (Gayley 637) A Mid Summer Nights Dream is often portrayed as a "comedy of errors"; however, some might question the characteristics that distinguish it as being utterly comic. A comedy is commonly defined as a play that is suitable to a tragedy employs a plot but then lighten to a happy conclusion. ...read more.

This also conveys the gravity put upon marriage, and the triviality placed on love. The seriousness in the threat of sending one's own daughter to get killed based on her disobedience to get marries it very grave and takes away from the comic aspect of the Play. These features of trouble in love belong to a tragicomedy, "Some characteristics (of a tragicomedy) are: ... pure love and gross love often being contrasted". (Thrall, and Hibbard 491) Shakespeare also places solemn characteristics in the supernatural fractions of the play. Oberon and Titania have an argument, one could say, mainly to prove which has more authority. The conversation turns to a little Indian boy, whom Oberon asks Titania to give him. But Titania responds that the boy's mother was a follower of hers before she died; in honor of his mother's memory, she will hold the boy near to her. Oberon declines to be with her, saying that they will be under hostility until she gives him the boy. The conflict between Oberon and Titania imports into the fairy realm the motif of love being out of balance. This fight over an Indian boy has a serious sense to it because of the consequences it has to everyone surrounding them. Their disagreements cause irregularities in weather, thus, disturbing everyone. ...read more.

The mixture of humble craftsmen with aristocratic noblemen also conveys the aspect of a tragicomedy that define this play. However, the characters are not hanged due to the comic features in the play, and as Theseus states "For never anything can be amiss, when simpleness and duty tender it." (V.i.152) As his career developed Shakespeare tended more and more to bring contrasted genres of tragedy, comedy and history closer together. Tragicomedy can best be described as a passage through unhappiness to happiness. Unlike a comedy, the characters actually suffer significant misfortunes, usually concerning the imbalance of love. However, tragicomedy also differs from tragedy, because the characters can overcome these hardships through self-sacrifice. In a tragedy, the mistakes of the hero are irreversible ones, and nothing he/she can do will alter the decisions that bring about his/her downfall. Within tragicomedy, the protagonist can realize his/her mistakes, and even if the consequences of his actions are severe, the hero can endure and sacrifice enough and eventually he/she will be rewarded with forgiveness and renewal that lead to their happy ending. A Mid Summer Night's dream embodies a tragicomedy based on the evidence that it is a comedy due to its various aspects of humorous elements, as well as the serious components throughout it. The serious sections throughout the play consist of human imbalance of love, jealousy that angers the fairies and the fear of punishment of the actors. ...read more.