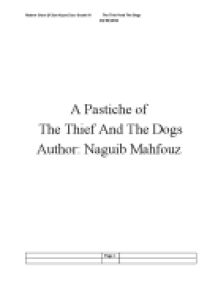 A Pastiche of The Thief And The Dogs Author: Naguib Mahfouz

﻿Robert Chan @ Zwe Kyaw Zwa Grade XI The Thief And The Dogs 10/10/2011 A Pastiche of The Thief And The Dogs Author: Naguib Mahfouz Rationale: I am writing a pastiche of one scene from ?The Thief And The Dogs,? by Naguib Mahfouz. I have used similar elements that Mahfouz has adopted in order to create a sense of hatred and fury in the characters. The pastiche is written in a way that it resembles the original plot of Mahfouz with the setting as well as the theme being the same. On the other hand, I have altered several of the dialogues and shorten some of the minor scenes, including the thorough description of Said?s daughter, Sana, which may divert the focus of the content from the interactions between the protagonist and the antagonist. The story is still set in Cairo, Egypt and the protagonist, Said Mahran, who has just been freed from prison, has decided to take revenge on all those who have plunged him in misery. He has returned to the traitor, Ilish Sidra, in order to reclaim his wealth and daughter but to be faced with reality; all his enemies have gathered to avert his plan. ...read more.

How can I tolerate if she can remember him? That insolent bastard! There is nothing to worry? Yes, she will never go back to him, that pathetic dog. Upon entering the room, she stared surprisingly at the gentlemen who had gathered around to discuss her fate. The tall man with almond- shaped eyes in the corner motioned her to come closer. No don?t! Heart pounding like a stampede, he shook his head yet, he managed to utter the terrible words. -Shake hands with Daddy. Come on, Sana, don?t be shy. Go say hello. He watched her, with a relief, as she screamed and scampered away. The tall man sat down and buried his face in his hands. Then, Ilish smiled wickedly and said -Give up, Said Mahran. Right now, I am on the side of the law. You will never manage to lay your hands on neither my family nor my property. Then, he saw it- the evil grin on the man?s face. He has something up his sleeve, a plan which will destroy my life? that sinful snake. I have tried so much for this to happen and he will not take my happiness away from me. ...read more.

The judge will decide this matter by the law at the court. However, I think you should not and will never win this case and believe me, even if you do so, Sana will never follow you nor will her mother desire her to. As the man turned away, he gave him another of those repugnant grins as though he wished to say, ?I will be back and this time it is your turn to suffer.? No, no. I am not crazy; he will be back for sure. After trying my best luring the wretched woman, the ugly she-fox, away from you and rending your heart, I have taken possession of everything that you have strived for with all your tears and blood. Now, you have come back but you will find no Ilish Sidra but a menacing wolf which will tear you apart just like the previous time. Ilish glanced around recklessly and pondered over his thoughts. I have to warn the others? no! They will serve me as a barrier between the devil and myself while I escape with my possessions from its fury, its claws and fangs. He will never ever catch me! Ha, ha, ha. He laughed insanely as his companions gaped at him in astonishment. Finally, he muttered -Pack everything up! We are leaving tonight. ??? Page ...read more.