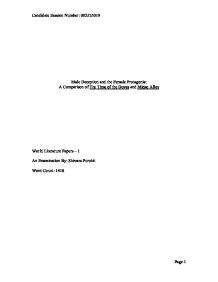 A theme omnipresent in Merc Rodoredas The Time of the Doves and Naguib Mahfouzs Midaq Alley is male deception. In both novels, a captivating male character enthralls the female protagonist, and leads her into miserable situations.

Male Deception and the Female Protagonist A Comparison of The Time of the Doves and Midaq Alley World Literature Papers - 1 An Examination By: Shivam Purohit Word Count: 1418 A theme omnipresent in Merc� Rodoreda's The Time of the Doves and Naguib Mahfouz's Midaq Alley is male deception. In both novels, a captivating male character enthralls the female protagonist, and leads her into miserable situations. The opening chapter of The Time of the Doves itself introduces Natalia as a submissive character; "But she made me come even though I didn't want to, because that's how I was. It was hard for me to say no if someone asked me to do something" (Rodoreda 15). She is young, inexperienced and doesn't have the guidance of her mother. At a dance, Natalia meets a charming man, who with his attractive "little eyes like a monkey," and sweet words, "I'd be his wife and his queen and we'd be dancing in the Placa del Diamant," mesmerizes, yet frightens her (Rodoreda 17). This initial encounter is analogous to the one between Hamida and Ibrahim in Midaq Alley. Hamida is na�ve and has been brought up with banal expectations. When she first sees Ibrahim then, she is fascinated; "His face was lean and elongated, his eyes almond-shaped and his eyebrows thick. His eyes reflected both cunning and boldness." ...read more.

The names absorb the new personalities and almost grow to define the characters. When Abbas and Hamida meet again, and Titi is addressed as 'Hamida,' she is reminded of Midaq Alley and her past life. Similarly, after Colometa and Antoni get married and he begins addressing her as 'Natalia' again, she leaves her despondent past and begins a more calm and secure life. By the end of the novel, Titi completely gives up her old name, thereby losing the final connections she had with her previous life. Natalia, on the other hand, gives up 'Colometa' when she returns to her old apartment for the last time; "So I turned back to the door and took my knife and carved Colometa on it in big, deep letters" (Rodoreda 197). This symbolizes the end of one phase of her life, and she hopes to leave the unhappiness she felt over the course of her years being Colometa in that apartment. Another similarity between the characters is that neither knew what they were entering into when they began to engage in the relationships under examination. Natalia's only source of advice was Senyora Enriqueta, who unemotionally stated, "I think you're sensible to get married young. You need a husband and a roof over your head...I think Quimet's a better match for you than Pere. He's got his own shop and Pere has to take orders," with no regard to his personality and how happy Natalia would be with him (Rodoreda 30). ...read more.

Colometa doesn't express any thoughts about her home until her father dies when "for a moment, just a moment, standing in the middle of my dining room I saw myself as a little girl with a white ribbon on top of my head walking beside my father when he took my hand and we went down streets with gardens and we always walked down the street with big houses...and the dog barked as we walked by" (Rodoreda 131). Similarly, "the only hour of her past life that Hamida missed was her late afternoon walk," and "she had no happy memories of the past..." (Mahfouz 261). It can then be analyzed that either both of the women were extremely preoccupied with their vocations or simply didn't have a joyful past. Nevertheless, their lives didn't turn out the way they had expected them to when they first met the men. Quimet and Ibrahim were extremely captivating; evident by how Colometa didn't ever think about getting a divorce and she even feared Quimet's return after she was married to Antoni, and Hamida didn't give up her meretricious activities even when she realized there was no hope of a real relationship with Ibrahim. Climatically, the male characters dramatically changed the women's lives, and lead them into a period of unhappiness, uncertainty and in one case, financial instability. In the end, both of the female protagonists leave the men and become more content with their lives. ...read more.