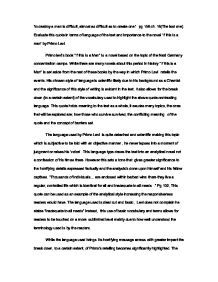 To destroy a man is difficult, almost as difficult as to create one: pg 156 ch. 16(The last one). Evaluate this quote in terms of language of the text and importance to the novel If this is a man by Primo Levi.

'to destroy a man is difficult, almost as difficult as to create one:' pg 156 ch. 16(The last one). Evaluate this quote in terms of language of the text and importance to the novel 'If this is a man' by Primo Levi. Primo levi's book "If this is a Man" is a novel based on the topic of the Nazi Germany concentration camps. While there are many novels about this period in history "If this is a Man" is set aside from the rest of these books by the way in which Primo Levi retells the events. His chosen style of language is scientific likely due to his background as a Chemist and the significance of this style of writing is evident in the text. It also allows for the break down (to a certain extent) of the vocabulary used to highlight the above quote contrasting language. This quote holds meaning to the text as a whole, it exudes many topics, the ones that will be explored are; how those who survive survived, the conflicting meaning of the quote and the concept of barriers set. ...read more.

This amazing contextual description completely baffles readers by the exact and contradiction meaning of it. "To destroy a man is difficult, almost as difficult as to create one: it has not been easy, nor quick, but you Germans have succeeded. Here we are, docile under your gaze; from our side you have nothing more to fear; no acts of violence, no words of defiance, not even a look of judgement." Pg 156. This paragraph holds contradicting meaning to Levi. The first response we have as readers is to note the tone; it sounds not Levi like, we note that in the whole novel this is the closest that Primo comes to giving out a judgement. Levi says 'you Germans', always he refrains from using this ad he notes not all Germans were part of the Nazi regime, he usually uses words such as 'the Lager', them, and they to define who he is referring to . The first part of the quote "To destroy a man is difficult..." this when read with the later part "It has not been easy, nor quick,..." brings about the concept that you have succeeded, you have managed, through your actions, to destroy a man or many a man ...read more.

Here is a turning point in Levi's assessment of how to survive the Lager, he notes that what they Lager are doing (destroying what it is to be a man) but also notes to himself that he knows what it is to be a man and therefore can make the statement it is more difficult to create one. Even if this recognition is not a conscious one it is sub-conscious and allows for him to assess how to live. This assessment brings about the conclusion that to survive the trial of being destroyed as a man one must suppress what it is to be a man. Levi does this as well as the other survivors. They suppress their human so as to avoid destruction, so as to avoid being classified as one of the 'drowned' (the broken men). Therefore from Levi's recognition of both difficulty to create men and supress your 'human' he manages to set a barrier between himself and 'the Lager', this is as low as I will sink, I will not be destroyed then be recreated, I have and will take the nessacary sacrifice to supress my human and survive, 'the Lager will not succeed. This powerful realisation is never expressed in Primo's own words but is contained in his scientific, horribly confronting sharp contrasts. ?? ?? ?? ?? ...read more.