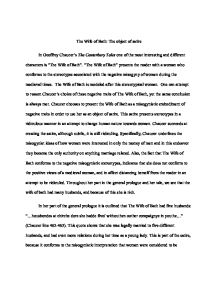 Analysis of Misogyny in Chaucer's &quot;The Wife of Bath&quot;

The Wife of Bath: The object of satire In Geoffrey Chaucer's The Canterbury Tales one of the most interesting and different characters is "The Wife of Bath". "The Wife of Bath" presents the reader with a woman who conforms to the stereotypes associated with the negative misogyny of women during the medieval times. The Wife of Bath is modeled after this stereotypical woman. One can attempt to reason Chaucer's choice of these negative traits of The Wife of Bath, yet the same conclusion is always met. Chaucer chooses to present the Wife of Bath as a misogynistic embodiment of negative traits in order to use her as an object of satire. This satire presents stereotypes in a ridiculous manner in an attempt to change human nature towards women. Chaucer succeeds at creating the satire, although subtle, it is still ridiculing. Specifically, Chaucer underlines the misogynist ideas of how women were interested in only the money of men and in this endeavor they became the only authority on anything marriage related. Also, the fact that The Wife of Bath conforms to the negative misogynistic stereotypes, indicates that she does not conform to the positive views of a medieval woman, and in affect distancing herself from the reader in an attempt to be ridiculed. Throughout her part in the general prologue and her tale, we see that the wife of bath had many husbands, and because of this she is rich. ...read more.

The first lines of her prologue show us that she depends on experience rather than listening and learning, and that because of this she knows more of marriage. This should be considered satire, because the manner in which experience is mentioned before marriage, may have been Chaucer's attempt to put more emphasis on the Wife of Bath's dependence on experience. This leads to an important trait that is satirized by Chaucer: the Wife of Bath's unwillingness to conform to the normal lifestyle of what was considered a good woman, this is what sets her apart and underlines her satirical nature. The Wife of Bath is unwilling to conform to the role of a good natured woman. In this manner she proves that she is an object satire, because she is being made a static character that is narrow minded. Throughout her prologue when she is explaining her marriages she switches the roles of marriage, the medieval idea of the man in control of a marriage is switched, and the idea of the medieval dogma that a good woman must follow is discarded. Chaucer chooses to use this non-conformity to an extreme to illustrate "The Wife of Bath" as an object of satire. For example throughout the first 100 lines of her tale she is refuting commonly held interpretations of the bible: "Men may divine and glosen up and down / But wel woot I express withouten lie / God bad us for to wexe and multiplye / That gentil text can I wel understone" (Chaucer 26-30). ...read more.

The more you know about a person, the more of chance you can forgive them, and forgiving a stereotype removes the attempt at satire, which is why we really know nothing about the Wife of Bath's true feelings. also that women claimed their knowledge only from experience and reading and listening were unimportant; are Chaucer's attempt Throughout her part in the general prologue we see that she embodies the traits of greed, lust, and unintelligence. It shows that she is very greedy. The wife of bath should be considered an object of satire. In general, this female character stereotype is meant to be seen as a parody of sorts since she embodies a number of negative female characteristics including stupidity and arrogance; deceitfulness, and lewdness. [Satire is t]he literary art of ridiculing a folly or vice in order to expose or correct it. The object of satire is usually some human frailty; people, institutions, ideas, and things are all fair game for satirists. Satire evokes attitudes of amusement, contempt, scorn, or indignation toward its faulty subject in the hope of somehow improving it the Wife of Bath presents herself as the authority on marriage and marital life. She comments on the social and legal position of women in marriage and daily life. She claims she has her knowledge from experience, not from scriptural authority. Rather than rejecting scriptural authority, she appeals to logic thus rejecting too strict interpretations of scriptural rules and commandments. ?? ?? ?? ?? ...read more.