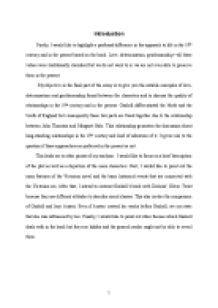 ﻿Introduction Firstly, I would like to highlight a profound difference in the approach to life in the 19th century and in the present based on the book. Love, determination, gentlemanship?all these values were traditionally cherished but we do not want to or we are not even able to preserve them in the present. My objective in the final part of the essay is to give you the notable examples of love, determination and gentlemanship found between the characters and to discuss the quality of relationships in the 19th century and in the present. Gaskell differentiated the North and the South of England but consequently these two parts are fused together due to the relationship between John Thornton and Margaret Hale. This relationship generates the discussion about long-standing relationships in the 19th century and kind of adoration of it. It gives rise to the question if these approaches are preferred in the present or not. This leads me to other points of my analysis. I would like to focus on a brief description of the plot as well as a depiction of the main characters. Next, I would like to point out the main features of the Victorian novel and the basic historical events that are connected with the Victorian era. After that, I intend to contrast Gaskell?s book with Dickens? Oliver Twist because they use different attitudes to describe social classes. ...read more.

Both of these writers depicted different social classes of the 19th century. Gaskell?s method of describing various social classes is of great interest to me because she used the symbols of places through which she distinguished social classes. This becomes highly visible in North and South. London denotes the symbol of intellectualism, education, rich and aristocratic classes. Helstone indicates the symbol of old feudal system, a lack of progress, friendliness, faith in God and agriculture. Milton represents the symbol of science, industry, businessmen, manufacturers, strikes and working class (the book referrers to workers as ?hands?). On the other hand, Charles Dickens depicted an entire social class with each individual character. The characters of Mr. and Mrs. Brownlow represent a high class in London. Mr. Sowerberry, who is a gravedigger and Oliver?s guardian, represents a middle class and the types of thieves such as Fagin indicate poor and low classes. (associatedcontent.com ? Portrayals of Work in Gaskell and Dickens) It seems to me that the similarity between Gaskell?s North and South and Austen?s Pride and Prejudice invites comparison because of a similar style and a choice of characters. Also, I should point out that both of these writers led quiet lives in a country parish and they came from the families of clergymen. Gaskell and Austen used very detailed dialogues through which we get to know the characters and their qualities. ...read more.

In my view, we should worship the relationship between two people in a way they do. It would help to hold people in high esteem and generally it would raise the quality of human relationships which is poorer and poorer. Conclusion To summarize, I believe I included all the points that I wanted to achieve in the introduction. As far as I am concerned, the book provided me with a startling insight into the problematic of the relationships and even into the human mind of the 19th century. In other words, the main protagonists? mutual devotion greatly impressed me. The books I used for writing my analysis helped me a lot because now I have my own personal view on the book as well as on the situation in England in the 19th century. I have been always interested in this topic which stems from the adoration of good manners, courtesy and the fact that even the kiss stood for something more than it means nowadays. On balance, I feel that our society will no longer be like in the 19th century. On the one hand, we can boast about our scientific and technical superiority but on the other hand, our relationships and values are poorer probably owing to a fast lifestyle. We should go back in time and refresh our memories with basic human values such as loyalty, politeness, respect for rules, etc. ...read more.