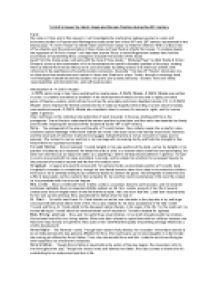 ï»¿“A Doll´s House” by Henrik Ibsen and Women Position during the 20th Century Topic My name is Olivia and in this research I will investigate the relationship between women´s social and economic position in Russian and Norwegian society at the turn of the 19th and 20th century represented in two drama plays: “A Doll´s House” by Henrik Ibsen and “Uncle Vanya” by Antoine Chekhov. With a critical view of the situation and the women status in those times and how theatre reflects this issues. To analyse deeply the argument of “A Doll´s House” I will interview Jeanne Sòula, a retired Argentinian actress who had the experience of representing Nora- protagonic character-the women of the house. Apart from the drama plays I will work with the help of three books: “ Studying Plays” by Mick Wallis & Simon Shepard, since by the examination of it I will emphasise the specific dramatic qualities of the plays, treating them as distinct from merely literary work, and concludes by setting drama in its historical context, with reference to the significance of specific location and actors. Secondly “The Idea Of Theatre” which give me an idea about the modernism and realism in Ibsen and Chekhov´s plays. Finally, through a sociology book, I will inestigate in depth de women position, the public and private patriarchy ; women, men and family responsabilities and domestic ties; and self-made women. Introduction of “A Doll´s House” In 1879, while living in Italy, Ibsen published his masterpiece, A Doll’s House. A Doll’s House was written in prose. It is widely considered a landmark in the development of what soon became a highly prevalent genre of theater—realism, which strives to portray life accurately and shuns idealized visions of it. ...read more.

Also we can notice, that Nora has to hide the fact that she´ve brought sweets, beacuse if his husband notices this, she would be grounded. This reflect the position in which she is Symbols in A Doll´s House On the first scene we can find different areas in which actions will be focused, as the sofa, the piano or the table, which becomes the place in which Nora faces Helmer squarely on Act 3 to insist on an adult conversation. A lamp provides stage focus for it. The lamp also perhaps signifies Nora´s wish for clarity, And we may feel that the sober conversations mirrors the one Ibsen is conducting with his audience. Comparing A Doll´s House and The Uncle Vania indirect criticism of society A play serves as the author's tool for critiquing society. One rarely encounters the ability to transcend accepted social beliefs. Both of these plays reflect controversial issues that the audience can relate to because they interact in the same situations every day. Though, we can observe, how both Ibsen and Chekov did have a sense of realism at the time of writing theatre. As late nineteenth century playwrights point out the flaws of mankind they also provide an answer to the controversy. Unknowingly the hero or heroine solves the problem at the end of the play and indirectly sends a message to the audience on how to solve their own problem. Like a solution to their lives. Henrik Ibsen and Anton Chekov both provide unique analysis on issues their culture never thought as wrong. In the play A Doll's House Ibsen tackles women's rights as a matter of importance being neglected. In his play he acknowledges the fact that in nineteenth century European life the role of the women was to stay home, raise the children, and attend to her husband. ...read more.

Nora becomes cognizant of the mistreatment she has endured, and consequently leaves to become someone different. Ibsen encourages women to make a change by taking action and not to watch their life pass by unfulfillingly. Nora becomes a role model for change. Chekov on the other hand does not solve his characters' problem in Uncle Vanya. He ends the play where it began, without resolution. Sonya and Uncle Vanya take on the burden of running the estate for Serebryakov without reimbursement while he lives abroad and enjoys the riches of life. Uncle Vanya cries while Sonya talks about how hard they will work for her father and expect nothing in return. Unlike Nora, Sonya accepts her life and does not make any change. She does not even try to change the family in which she was born . She believes that if she does what is asked of her she will be rewarded in afterlife. Chekov lets Sonya further entrench herself in the problem. The audience knows from Uncle Vanya's tears that Sonya's decision is not the right one. In A Doll's House and Uncle Vanya the audience gathers a picture of what it was like to live in the late eighteen hundreds. This picture is not a positive one. More wrongs are committed against the characters of these plays than any sort of reward for the hardships they endure. These plays reflect an accurate representation of the society that existed when they were written. Nora and Sonya find that they are trapped in a world that they do not belong in. Nora finds a way out and Sonya waits for a new world to come along and rescue her. Society oppressed both families by masking the truth of their lives for so long. Chekov and Ibsen contribute to the solution by providing their plays as examples of why Europe was wrong. Introduction of ?The Uncle Vanya? ...read more.