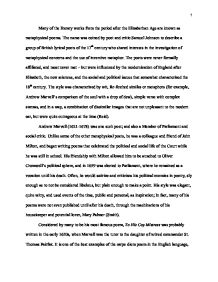 Andrew Marvell and the Metaphysical Poem. Considered by many to be his most famous poem, To His Coy Mistress was probably written in the early 1650s

Many of the literary works from the period after the Elizabethan Age are known as metaphysical poems. The name was coined by poet and critic Samuel Johnson to describe a group of British lyrical poets of the 17th century who shared interests in the investigation of metaphysical concerns and the use of inventive metaphor. The poets were never formally affiliated, and most never met - but were influenced by the modernization of England after Elizabeth, the new sciences, and the social and political issues that somewhat characterized the 18th century. The style was characterized by wit, far-fetched similes or metaphors (for example, Andrew Marvell's comparison of the soul with a drop of dew), simple verse with complex stanzas, and in a way, a combination of dissimilar images that are not unpleasant to the modern ear, but were quite outrageous at the time (Reid). Andrew Marvell (1621-1678) was one such poet; and also a Member of Parliament and social critic. Unlike some of the other metaphysical poets, he was a colleague and friend of John Milton, and began writing poems that celebrated the political and social life of the Court while he was still in school. ...read more.

This man is intense, speaks eloquently, but essentially has one thing in mind - he desires this woman sexually: Poem Literal Interpretation Had we but world enough, and time.... The poem begins with an air of impatience, but we are given really two settings; the setting we imagine as the reader (listener) and the setting the speaker imagines which could be a host of either erotic or musing areas. Plus, simply by reading the title, we have a point of view that this lady is teasing - or at least the author thinks she is - coy. One major theme, too, is time - the speaker sees time as the big enemy. My vegetable love should grow Vaster than empires, and more slow; This implies that his love (or lust) has no bounds; what do vegetables do? They grow rapidly, spreading out and filling the area with greenery. And, if we think about love vaster than an empire; the largest political state known to the author, that is far and above what anyone might wish. But at my back I always hear Time's winged chariot hurrying near; Again, time is the enemy - it is always encroaching; ...read more.

and glean some insights into the worldview of the time, and the manner in which more expansive thinking was becoming popular. For instance, there is a contrast between the opening and the sections dealing with graves, vaults and worms - these are not visions of love, but of the destiny that awaits all humans. The phrase, "world enough and time," though, has been used again and again in modern literature, and seems to be in contrast to the doom and dark of the graves and worms. Perhaps the entire poem is Marvell's metaphor for life - almost as if we should push through the joys of life, which are the sensual side as metaphors for the author, then we will cheat death in a way and become more human and youthful in the process. The "dew" becomes seductive, in fact, everything is seductive in nature - the world is seductive for this author (Moldenhauer). Too, the entire poem might be read as a treatise on life - with nature being the coy mistress who gives and takes at a whim, and in this case, to seduce nature (e.g. the metaphysics and alchemists of Isaac Newton, etc.), becomes the goal of every sane person. ...read more.