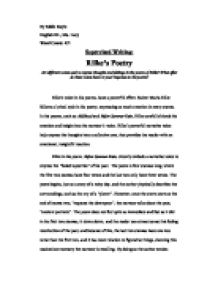 Are different voices used to express thoughts and feelings in the poems of Rilke? What effect do these voices have on your responses to the poems?

By Eddie Royle English HL, Ms. Lacy Word Count: 471 Supervised Writing: Rilke's Poetry Are different voices used to express thoughts and feelings in the poems of Rilke? What effect do these voices have on your responses to the poems? Rilke's voice in his poems, have a powerful effect. Rainer Maria Rilke follows a lyrical style in his poetry, expressing so much emotion in every stanza. In his poems, such as childhood and Before Summer Rain, Rilke carefully blends his emotion and insight into the narrator's voice. Rilke's powerful narrative voice help express his thoughts into a collective one, that provides the reader with an emotional, insightful reaction. ...read more.

However, once the storm starts at the end of stanza two, "requests the downpour", the narrator talks about the past, "ancient portraits". The poem does not feel quite as immediate and fast as it did in the first two stanzas, it slows down, and the reader can almost sense this fading recollection of the past, and because of this, the last two stanzas have one less verse than the first two, and it has more relation to figurative things, showing this washed out memory the narrator is recalling. By doing so the author evokes emotion in the reader and suggests that it is a childhood memory similar to everyone, and yet tells the poet's sorrowful memories. ...read more.

It gives the sense that the reader must have this collective feeling as the narrator to childhood years, thus unifying the narrator with the reader. At the end of the poem, the reader has this image of the narrator as a lost adult in the world, struggling as time moves forward, "where now having to go on bewilders us." The narration of the poem, gives imagery itself. Because the reader looks beyond the text, but imagines, this person telling the story, and the reader can't help but feel pity for the author. Rilke's narrative voice, give a very personal effect to his writing, and it allows the reader to unite the same emotions to his own. ...read more.