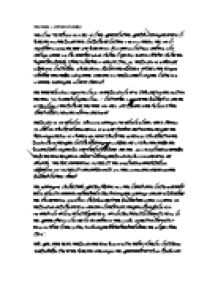 Because by James McAuley is a thoughtful and thought-provoking text. It is a reflection of the poets life and parents and his views of them.

Because - James McAuley "Because" by James McAuley is a thoughtful and thought-provoking text. It is a reflection of the poet's life and parents and his views of them. Also in a figurative sense he tells us to reflect on our own lives and see what we can change while we are still alive. He creates a gloomy feel in order to create the right atmosphere for the matter he wishes to discuss. The poem is extremely euphonic and makes us reflect on our past. When spoken, it rolls of the tongue naturally. This helps cement the intention of the poet leaving the audience with the feeling he wants to deliver. The title has some significance in the poem as it is directly mentioned in the line "My mother sang because..." ...read more.

The setting is created through descriptions of the author's life and events that have stayed with him. Rather than describing the setting, which is probably the family home, scenarios are presented. The speaker shows his own life in the poem. His parent's love which was that not of high soaring passion neither was it as soft and fragile love, it was described as a kind of love, as though their love was only an imitation "They were united in a kind of love/As daily as the Sydney morning herald/Rather than like the eagle or the dove". Throughout the text of the poem the tone received is that of a heavy and dense feel, perhaps due to the reflection being so thoughtful that it forces a person to start reflecting on himself. ...read more.

"They cared for us and love us. Once they stood/ Tall in my child hood as the school, the steeple." This is also a form of symbolism/simile as his parents were high as a steeple, showing the major authority they had over him, was as great as a church's authority. The poem is a great example of poetry. However a writer has to be careful that the implication is clear. The more abstract the words, the greater the risk the reader won't see what the writer intended. However I believe James McAuley has made an excellent approach towards this scenario, and brings in the atmosphere with great delicacy; however the impact it creates is heavy. I find that the author is able to create a serious and gloomy atmosphere, evoking a tense mood. James McAuley very cleverly creates this mood of seriousness and density. ...read more.