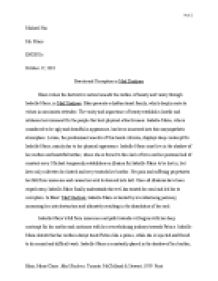 Blais evokes the destructive nature beneath the surface of beauty and vanity through Isabelle-Marie, in Mad Shadows.

﻿Hui Michael Hui Ms. Pitaro ENG3U1e October 17, 2012 Beauty and Corruption in Mad Shadows Blais evokes the destructive nature beneath the surface of beauty and vanity through Isabelle-Marie, in Mad Shadows. Blais presents a dysfunctional family, which deeply roots its values in narcissistic attitudes. The vanity and importance of beauty establish a hostile and intolerant environment for the people that lack physical attractiveness. Isabelle-Marie, who is considered to be ugly and dreadful in appearance, has been immersed into this unsympathetic atmosphere. Louise, the predominant enactor of this harsh criticism, displays deep contempt for Isabelle-Marie, mainly due to her physical appearance. Isabelle-Marie must live in the shadow of her mother and beautiful brother, where she is forced to face lack of love and her personal hell of constant envy. Michael temporarily establishes an illusion for Isabelle-Marie to be lost in, but later only cultivates her hatred and envy towards her brother. Her pain and suffering perpetuates her fall from innocence and causes her soul to descend into hell. Once all illusions have been wiped away, Isabelle-Marie finally understands that evil has tainted her soul and led her to corruption. In Blais? Mad Shadows, Isabelle-Marie is tainted by overwhelming jealousy, immersing her into destruction and ultimately resulting in the dissolution of her soul. Isabelle-Marie?s fall from innocence and path towards evil begins with her deep contempt for her mother and continues with her overwhelming jealousy towards Patrice. ...read more.

Blais establishes a profound change of character in Isabelle-Marie, emphasizing her desire for beauty and her increasingly vain attitude. During a party for her mother?s wedding, Isabelle-Marie meets Michael, a blind boy who is still vain and concerned with physical appearance. However, since Isabelle-Marie longs for affection, she lies to him about her appearance. As her relationship with Michael grows, her vanity replaces her old mentality. She is blinded as she turns away from the truth and starts to become more and more like her mother, whom she despises. Her desire for the affection that she has been deprived of transforms her into Louise. More than anything, she wants Michael to love her. Once Michael asks to marry Isabelle-Marie, she knows that ?everything would be like Louise, like Lanz, like the vast tragedy in which they all were grave performers? (Blais 66). She understands that her relationship with Michael has become a reflection of Louise?s relationship with Lanz. Isabelle-Marie recognizes that they will become soulless dolls in a relationship with no true meaning, and it is this knowledge that saddens her. She despises her mother because of her lack of a soul but she transformes into a doll herself, completely shutting off her old values and beliefs. The relationship with Michael only temporarily satisfies Isabelle-Marie?s desires, later aggravating her hatred towards Patrice. ...read more.

While visiting her mother?s farm, she hurls a lantern into the dry straw, ?[thinking] that it was Louise?s land that she was destroying but suddenly [realizing] that it was God?s land? (Blais 121). At this point, she desires total destruction, even if it means destroying the land that she loves so much. Her corruption and tendency towards sin blinds her from the very morals that have been rooted deep inside her. During the ending of Mad Shadows, Isabelle-Marie understands the full gravity of all her actions. She calls out for a god, someone to save her soul, but it is too late. She decides to end to life, her soul searching for any kind guidance as it plummets into hell. In Blais? Mad Shadows, Isabelle-Marie is stained with overwhelming jealousy and deep contempt, triggering her fall from innocence and journey towards corruption. Blais evokes Isabelle-Marie?s malevolence through her profound change in character and her grave decision to harm Patrice and Louise. Her disdain for Patrice and Louise is rooted in the unfortunate atmosphere she is raised in. Isabelle?s suffering and pain from her failed relationship with Michael influences her to act upon her impulse. Through these actions, she loses all sight of innocence and her soul embraces corruption. Ultimately, Isabelle-Marie is the victim of the destructive nature of beauty and vanity, resulting in the dissolution of her soul. A harsh atmosphere that promotes vanity and rejects proper nurturing becomes a dangerous environment for wickedness and corruption to cultivate and penetrate the human soul. ...read more.