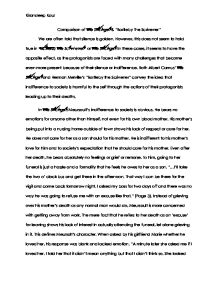 Both Albert Camus The Stranger and Herman Melvilles Bartleby the Scrivener convey the idea that indifference to society is harmful to the self through the actions of their protagonists leading up to their deaths.

Comparison of The Stranger & "Bartleby The Scrivener" We are often told that silence is golden. However, this does not seem to hold true in "Bartleby the Scrivener" or The Stranger. In these cases, it seems to have the opposite effect, as the protagonists are faced with many challenges that become even more present because of their silence or indifference. Both Albert Camus' The Stranger and Herman Melville's "Bartleby the Scrivener" convey the idea that indifference to society is harmful to the self through the actions of their protagonists leading up to their deaths. In The Stranger, Meursault's indifference to society is obvious. He bears no emotions for anyone other than himself, not even for his own blood mother. His mother's being put into a nursing home outside of town shows his lack of respect or care for her. He does not care for her as a son should for his mother. He is indifferent to his mother's love for him and to society's expectation that he should care for his mother. Even after her death, he bears absolutely no feelings or grief or remorse. To him, going to her funeral is just a hassle and a formality that he feels he owes to her as a son. ...read more.

The magistrate is disgusted with Meursault's indifference and proclaims him to be a hardened soul. The prosecutor alleges that Meursault's lack of grief over his mother's death threatens the morals of society. Meursault's conviction is based not so much on his committing of a murder, as it is on his prior attitudes and actions towards the people around him. Had he not been indifferent to society, he would've cared for and shown emotion in these cases, therefore it is his indifference that damaged his image and morals and ultimately led to his death. In "Bartleby the Scrivener," the presence of indifference to society is also very obvious. Bartleby is a strange character who is indifferent to everyone and everything around him. This is seen through his repetition of the phrase 'I would prefer not to.' When Bartleby says this, he is simply showing an act of non-caring, whether it be towards taking an order from his boss to do examine an assignment or to passively assert himself. In using this phrase, Bartleby becomes increasingly isolated from society. The first time Bartleby says he would 'prefer not to' is when the Lawyer asked him to examine a document. The Lawyer is caught off guard by his response but does not get mad and fire him. ...read more.

Both Albert Camus' The Stranger and Herman Melville's "Bartleby the Scrivener" convey the idea that indifference to society is harmful to the self through the actions of their protagonists leading up to their deaths. Each of the characters possesses certain qualities that make them vulnerable to society. Their inability to speak out against anything that is wrong or to stick up for themselves makes others have a bad opinion of them which leads to their death. Bartleby is seen as a threat simply because of his indifferent nature. Because he chooses not to respond to others or take orders, he has a bad image. He is placed in jail because of his refusal to leave the building, even though he is doing nothing wrong. Meursalt's image is tarnished because of his relationships with his mother and Marie. These images lead to their placement in jail. Had they not been like this, they wouldn't have done the things that they did. All of their actions had a negative impact on their lives and led them to do the things that got them placed in jail. Their destructive decisions were based on their indifference which caused their lack of logic and social morals. The authors' purpose is to show that one must be conscious of their surroundings and must in a way, conform to the normality of society because if not, they will similarly harm themselves. ?? ?? ?? ?? Kirandeep Kaur ...read more.