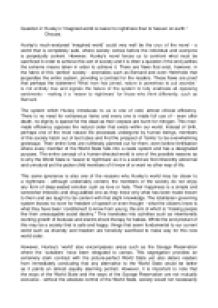 Brave New World. Huxleys imagined world is nearer to nightmare than to heaven on earth. discuss.

﻿Question 2: Huxley?s ?imagined world is nearer to nightmare than to heaven on earth.? Discuss. Huxley?s much-analysed ?imagined world? could very well be the crux of the novel - a world that is completely safe, where society comes before the individual and everyone is perpetually content. However, Huxley?s novel forces us to confront what must be sacrificed in order to achieve this sort of society and it is often a question if the end justifies the extreme means taken in order to achieve it. There are flaws that exist, however, in the fabric of this ?perfect? society - anomalies such as Bernard and even Helmholtz that jeopardise the entire system, providing a contrast for the readers. These flaws are proof that perhaps the statement ?What man has joined, nature is powerless to put asunder.? is not entirely true and signals the failure of the system to fully eradicate all opposing sentiments - making it a ?nearer to nightmare? for those who think differently, such as Bernard. ...read more.

world we find inherently abnormal and unnatural yet the poster child members of it know of or want no other way of life. This same ignorance is also one of the reasons why Huxley?s world may be closer to a nightmare - although undeniably content, the members of the society do not enjoy any form of deep-seated emotion such as love or hate. Their happiness is a simple and somewhat imbecilic and drug-addled one as they know only what has been made known to them and are taught to be content with that slight knowledge. The totalitarian governing system leaves no room for freedom of speech or even thought - what the citizens know is what they have been ?conditioned? to know from young, the aim of which is ?making people like their unescapable social destiny." This translates into activities such as intentionally stunting growth of foetuses and electro-shock therapy for babies. ...read more.

The world carefully constructed by Huxley is one that potentially serves as both a warning as well as an ideal - whilst the society encapsulates important values such as safety and community awareness, we must be careful not to over-step boundaries until we end up sacrificing what is human about ourselves as the World State has done. The world constructed by Huxley is nightmarish in many aspects - perhaps not in the ideals they have achieved but by the means they have resorted to to attain these standards such as the drug soma, as well as conditioning and the classification system. The lack of compromise in the world where it is either all or nothing represent a bleak possible future of the human race and though seemingly perfect on the surface, is ?closer to nightmare? within. 795 words. ...read more.