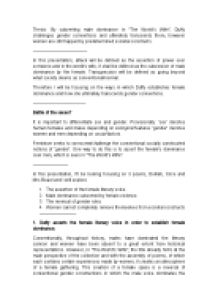 For example, ?The lady says that?s not what I meant? undermines the Beast?s sexual performance, and we see her forcibly ordering him around. In fact, ensuring she is sexually fulfilled is the priority, not the desires of the beast. ?The pig in my bed was invited? emphasizes that it is a privilege for the Beast that she has allowed him to be in her presence, reinforcing his subordinate position next to her. ?The Beast kept out of sight,? tells us that he had to give her space when required, but still had to serve them at the poker game. He has become her servant, obeying every command and she controls when she wants him near her or not. Hence, she adopts this active role to overturn male dominance by belittling him ?? an act of aggression as she forcibly takes action to oppress him. -------------------------------------- We can see that female dominance is established through transgressing gender conventions. Duffy establishes conventional gender roles within ?Delilah? in order to actively move away from them. The poem begins with an imperative, 'Teach me', reflecting Samson's strong, dominant character. The second stanza depicts Samson speaking directly, in first person; the tone is boastful and the language violent 'rip', 'roar', 'fire', and 'flay'. Samson relates his accomplishments in declaratives: 'There's nothing I fear.' His speech emphasizes his dominant and strong personality, conventional traits of the masculine gender. ...read more.

--------------------- Circe However, in Circe, in the midst of describing her culinary attack on men, she slips into a state of emotional vulnerability and recalls a time when she was young and ?hoping for men?. This indicates that despite the dominant and aggressive role Circe seems to take on, she is still prone to emotional weakness, a conventional female trait. -------------------------------- MRS BEAST However, it seems that there can be no complete role reversal, instead, by asserting dominance over men, she seems to have taken on the traits commonly associated with the male gender, Furthermore, it seems as though Mrs Beast cannot be entirely independent, instead she actively seeks out a male presence and is satisfied co-existing with the Beast. Therefore, we can see that although Duffy seeks to establish female dominance through moving away from conventional gender roles within the poems, she also shows that these roles are so deeply rooted within society and it is impossible for the female voice to be completely removed from such stereotypes. --------------------------- Conclusion In conclusion, Duffy challenges male power and the notion of male dominance in society by consciously asserting the female gender in The World?s Wife. Duffy establishes various ways of transgressing gender roles like through the establishment of the female literary voice and the aggressive actions taken by them, they result in the subversion of male dominance and power. Although Duffy tries to move past gender constructs, she still showcases that such societal notions are inevitable and women in ?The World?s Wife? are unable to completely remove themselves from such structures. ...read more.