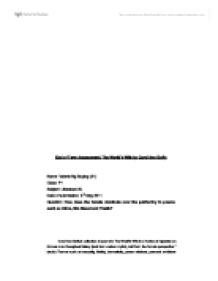 Carol Ann Duffys collection of poems &quot;The Worlds Wife&quot;. How does the female dominate over the patriarchy in poems such as Circe, Mrs Beast and Thetis?

End of Term Assessment: The World's Wife by Carol Ann Duffy Name: Valerie Ng Suying (21) Class: P1 Subject: Literature SL Date of submission: 3rd May 2011 Question: How does the female dominate over the patriarchy in poems such as Circe, Mrs Beast and Thetis? Carol Ann Duffy's collection of poems in The World's Wife is a "series of vignettes on famous men throughout history [and from various myths], told from the female perspective." (rte.ie) Themes such as sexuality, fidelity, domesticity, power relations, personal ambitions and love are explored, often surrounding the broader topic of feminism and female dominance. In poems such as Circe, Mrs Beast and Thetis, Duffy explores these concepts through language, imagery employed, and the reconstruction of gender roles and transformations of female figures. Female dominance is shown through the usage of authoritative language by female figures. Majority of poems in The World's Wife "maintains a binary structure where the objects of female poetic discourse are men." ...read more.

Female dominance is also illustrated through the reassertion of gender attributes and roles, as well as the transformations of the female figures. In Thetis, the speaker continually changes her shape in order to escape the powerful and violent male figure. Each time, Thetis evolves into more powerful and dominant creatures, from a small bird: "size of a bird in the hand/ of a man", to an albatross, a snake, a lion: "roar, claw, 50 lb paw", a mermaid and other sea creatures, and finally to animals such as "raccoon, skunk, stoat, /...rat" that are well-known for their will-power and strength to survive despite overwhelming adversity. This power of metamorphosis that Thetis possesses, takes on the form of a masculine image, displaying female transcendence and her ability to adapt in a male-dominating sphere. In Mrs Beast, Duffy demonstrates a male-female role reversal, describing the female in a controlling hand and masculine activity - 'Poker', and depicting them to be that of a commanding figure who challenges patriarchy and adopts a dominating role in the relationship, rather than being a "Little Mermaid" who undergoes a painful transformation for the male. ...read more.

In Thetis, despite the female figure constantly trying to take on a stronger image at each transformation, she is still conquered by the male figure - "Size 8. Snake", which describes her being put into an image that is determined by men. Often, aggressive images disrupting the female in finding her identity are displayed. For example, "I felt my wings/ clipped by the squint of a crossbow's eye." Also, the pronoun 'his' is constantly placed before each phrase - "his hook, his line...his sinker" emphasizing the presence and control of the male persona. Similarly, Mrs Beast has a form of desire for the beastly male character in the poem. In conclusion, female dominance is portrayed through the use of demeaning language and imagery, as well as the reconstruction of gender roles and characteristics. Though the female tries to take on a more masculine figure, she is unable to fully exercise control over the patriarchal. Nevertheless, the suppressed women dares to long for the prospects above the limited horizons. ...read more.