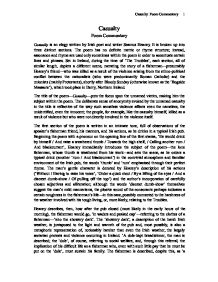 Casualty is an elegy written by Irish poet and writer Seamus Heaney. It is broken up into three distinct sections. The poem has no definite metric or rhyme structure;

Casualty Poem Commentary Casualty is an elegy written by Irish poet and writer Seamus Heaney. It is broken up into three distinct sections. The poem has no definite metric or rhyme structure; instead, assonance and rhyme are used only sometimes within the poem in order to accentuate certain lines and phrases. Set in Ireland, during the time of 'The Troubles', each section, all of similar length, depicts a different scene, narrating the story of a fisherman-presumably Heaney's friend-who was killed as a result of the violence arising from the ethno-political conflict between the nationalists (who were predominantly Roman Catholic) and the unionists (mainly Protestants), shortly after Bloody Sunday (otherwise known as the 'Bogside Massacre'), which took place in Derry, Northern Ireland. The title of the poem-Casualty-puts the focus upon the unnamed victim, making him the subject within the poem. The deliberate sense of anonymity evoked by the unnamed casualty in the title is reflective of the way such senseless violence affects even the nameless, the unidentified, even the innocent; the people, for example, like the casualty himself, killed as a result of violence but who were not directly involved in the violence itself. The first section of the poem is written in an intimate tone, full of observations of the speaker's fisherman friend, his manners, and his actions, as he drinks in a typical Irish pub. Beginning the poem with a pronoun on the opening line of the first stanza, 'He would drink by himself / And raise a weathered thumb / Towards the high shelf, / Calling another rum / And blackcurrant', Heaney immediately introduces the subject of the poem-the lone fisherman, whose thumb is weathered from his work-and sets the scene, as he orders a typical drink (another 'rum / And blackcurrant') in the convivial atmosphere and familiar environment of the Irish pub, the words 'thumb' and 'rum' emphasised through their perfect rhyme. ...read more.

The pronoun 'his' ('Everyone held / His breath and trembled'), as opposed to the general 'their', is symbolic of how the whole town-not just Heaney himself-holds the same breath and grieves, together, in the same way, for the victims killed as the result of the senseless and unnecessary violence. The beginning of the second section of the poem, which commences on the fourth stanza, is about the day of the funeral held for the victims killed during Bloody Sunday, taking a tone of great melancholy to illustrate the impact of the brutal event upon the now bereaved town. The stanza begins by immediately painting a bleak and dreary scene in the reader's mind: 'It was a day of cold / Raw silence'. The assonance of the hollow vowel sounds ('cold', 'raw'), the adjective 'raw' being almost onomatopoeic, evoke the feelings of emptiness, stillness and painful emotion, in direct juxtaposition to the powerful and intense images of the violence in the previous section. The 'wind-blown / Surplice and soutane' is a reference to the garments worn by the church priest, the alliteration of the voiceless consonant 's' ('surplice' and 'soutane') accentuating the rustling sounds of the wind and the town's quiet grieving. 'Rained-on, flower-laden / Coffin after coffin / Seemed to float from the door / Of the packed cathedral / Like blossoms on slow water.' 'Coffin after coffin', the repetition of the word 'coffin', is an indication of the great number of deceased and the extended metaphorical images of flowers and water are repeated within the phrase ('rained-on', 'flower-laden', 'float from the door', 'blossoms on slow water'), comparing the odd movement of the many coffins through the doors of the cathedral to the gentle floating of blossoms on slow water. Creating a tranquil, even beautiful, image, and dramatically slowing down the rhythm of the poem, the eerie metaphor is juxtaposition to the cold, raw silence mentioned at the beginning of the stanza and is representative of the slowness of the community's lamentation: like blossoms on slow water, their grief-filled thoughts can only slowly drift away. ...read more.

create a steady, measured pace as the elegy describes the fisherman working with his everyday routines and regularities, happy in his natural setting (the words 'smile' and 'mile' emphasized through perfect rhyme) and his familiarly effortless talent. This is the fisherman's 'proper haunt', Heaney tells his ghost; not at the pub, his defiant rebellion against the curfew, but on the vast ocean, 'somewhere, well out, beyond...': far, far away from the political conflicts and the tribal complicities on the land. The last stanza is Heaney's invitation to the fisherman's ghost to 'question [him] again'. Now gone, the fisherman, an outsider from society, and a loner in his 'proper haunt', has become a 'dawn-sniffing revenant'. Heaney longs to talk to him again, inviting him to 'plodder through midnight rain' and 'question [him] again', alluding to their midnight conversations in the pub, and asking him to ask him unanswerable questions (a reference to the 'How culpable was he / That last night when he broke our tribe's complicity?' of the second part of the poem) once again; that is, a reminder to remember forever the fisherman's death, endlessly questioning the political conflicts within his country and their brutal effects upon the entire community. In conclusion, Casualty, by Seamus Heaney, is a highly emotive elegy, broken up into three distinct sections and having no definite metric or rhyme structure. It is set in Ireland, during the time of 'The Troubles', and each section, all of similar length, depicts a different scene, narrating the story of an anonymous fisherman who was killed as a result of the violence arising from the Irish ethno-political conflict, shortly after Bloody Sunday (otherwise known as the 'Bogside Massacre'), which took place in Derry, Northern Ireland. As well as being a memorial poem, it depicts the terror relating to the sectarian violence which led to his friend's death, and is the poet's cynical criticism of the 'tribal' warfare between the nationalists and unionists in Ireland. ?? ?? ?? ?? Casualty: Poem Commentary 1 ...read more.