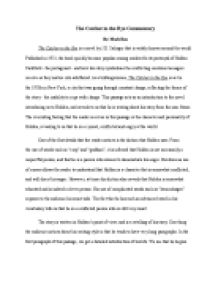 Catcher in the Rye Commentary

﻿The Catcher in the Rye Commentary By: Mark Ren The Catcher in the Rye is a novel by J.D. Salinger that is widely known around the world. Published in 1951, the book quickly became popular among readers for its portrayal of Holden Caulfield - the protagonist - and how his story symbolises the conflicting emotions teenagers receive as they mature into adulthood. As a bildungsroman, The Catcher in the Rye is set in the 1950s in New York, a city that was going through constant change, reflecting the theme of the story - the inability to cope with change. This passage acts as an introduction to the novel introducing us to Holden, and reveals to us that he is writing about his story from the near future. The overriding feeling that the reader receives in this passage is the character and personality of Holden, revealing to us that he is a cynical, conflicted and angry at the world. One of the first details that the reader notices is the diction that Holden uses. ...read more.

The tone is further shown when he states that he doesn?t want to retell his ?whole goddam biography?. We see that he is clearly annoyed about having to write his story. Holden also writes with metaphors and similes. When he describes his brother, D.B. working in Hollywood, he says that D.B. is ?being a prostitute?. By this line, the reader knows that Holden has a clear distaste for Hollywood and the celebrities living there, and that he is angry at his brother for writing movies instead of books. His anger towards Hollywood reveals to us that Holden dislikes phoniness, and that he dislikes people who do not act as their true selves - as actors do. Holden becomes a character who is cynical to anyone who fakes their own appearance, and the reader understands that Holden dislikes how so many people in the world are phony. Holden frequently uses italics in his writing to express his annoyance and his sarcasm. Words like ?nice?, ?brother?, and ?use? are all italicized to show the reader that Holden does not necessarily mean what he writes. ...read more.

The setting of the story plays a big part in Holden?s story, and he reveals that he is retelling his accounts of ?last Christmas?. Holden lives in New York, and lives during the 1950s. This was a time of vast change, and the reader can see that Holden may not necessarily fit in. His hatred of the changing New York is stemmed from his hatred of change. Holden is a character who dislikes change, and wants things to stay as they are, to stay simple. He does not like the change youth must go through to mature, and would rather people all stay innocent and happy. The opening passage of the story discloses to the audience the type of character Holden Caulfield is. J.D. Salinger cleverly uses Holden Caulfield?s voice in The Catcher in the Rye to express his anger towards the change in the world. In the first few lines of the novel, the reader already knows that Holden is a cynical and conflicted person. By writing though the voice of a conflicted adolescent, J.D. Salinger is able to achieve a connection with the reader, allowing the reader to believe in Holden?s story, and understand his problems. ...read more.