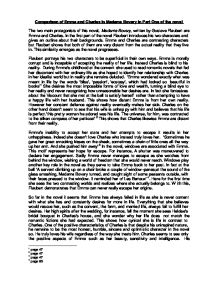 The two main protagonists of this novel, Madame Bovary, written by Gustave Flaubert are Emma and Charles. In the first part of the novel Flaubert introduces his two characters and gives an outline about their backgrounds. Emma and Charles are contrasting characters but Flaubert shows that both of them are very distant from the actual reality that they live in. This similarity emerges as the novel progresses.

Flaubert portrays his two characters to be superficial in their own ways. Emma is morally corrupt and is incapable of accepting the reality of her life. Instead Charles is blind to his reality.  During Emma’s childhood at the convent she used to read romantic novels that fed her discontent with her ordinary life as she hoped to identify her relationship with Charles in her idealist world but in reality she remains deluded. ‘Emma wondered exactly what was meant in life by the words ‘bliss’, ‘passion’, ‘ecstasy’, which had looked so beautiful in books’[1] She desires the most impossible forms of love and wealth, turning a blind eye to her reality and never recognizing how unreasonable her desires are. In fact she fantasizes about the Viscount that she met at the ball to satisfy herself rather than attempting to have a happy life with her husband. This shows how distant Emma is from her own reality. However her constant defiance against reality eventually makes her sick. Charles on the other hand doesn’t seem to see that his wife is unhappy with him and believes that his life is perfect.’this pretty woman he adored was his life. The universe, for him, was contracted to the silken compass of her petticoat’[2] This shows that Charles likewise Emma are distant from their reality.

Emma's inability to accept her state and her attempts to escape it results in her unhappiness. Indeed she doesn’t love Charles who instead truly loves her. ‘Sometimes he gave her great smacking kisses on the cheek, sometimes a chain of little ones all the way up her arm. And she pushed him away’[3] In the novel, windows are associated with Emma. This motif represents her hope for escape. For instance, A shutter was maneuvered to declare her engagement. Sadly Emma never manages to escape as she watches from behind the window, wishing a world of freedom that she would never reach. Windows play another key role in the novel as they serve to take Emma back to her past. In fact at the ball ‘A servant climbing up on a chair broke a couple of window-panes;at the sound of the glass smashing, Madame Bovary turned, and caught sight of some peasants outside, with their faces pressed to the window. It reminded her of Les Bertaux’[4]. Here for the first time she sees the two contrasting worlds and realizes where she actually belongs to. With this, Flaubert demonstrates that Emma can never really escape her origins.

So far in the novel it seems that Emma has always failed in life as she is never content with what she has and constantly desires for more in life. Everything that she believes would rescue her, such as the convent, the farm, and married life, always fail to fulfill her desires. Her high spirits after the wedding, for instance, fall the moment she sees Heloise's bridal bouquet in Charles's house, and she wonder why her life does not match the romantic fictions she had expected. This shows how cynical she is life in contrast to Charles. One of the positive characteristics of Charles is that despite his uninspired nature, he remains to be the most honest, humble, sincere and optimistic character in the novel so. He truly loves his wife regardless of the way she treats him. Charles seems to see only the positive aspects of Emma such as her beauty, sensitivity and intelligence.His awareness of the tiny details of her physical beauty betray that he thinks of her more as an object than as a person. When the narrative focuses on his point of view, we see every detail of her. ‘Charles was astonished at the whiteness of her nails. They were shiny and tapering, scrubbed cleaner and cut almond shape’[5]

Emma was well educated. She was an ‘expert at dancing, geography, drawing, fancy needlework and the piano’[6] Charles admired her intelligence. Charles on the other hand is a complete lazy failure. In fact his laziness has obstacled him from becoming a proper doctor. At one point in the novel as he goes to repair Rouault's leg he ‘searched his memory for all the fractures he had studied’[7] Here the reader is told that he is just an ‘Officer of Health’[8] and his incompetence has restrained him from moving up the social class which could have satisfied Emma’s desires. Charles's failure to pass his medical exams and his inability to comprehend Emma's words shows his uninspiring nature. The characters' frequent inability to communicate with each other is symbolic. In the first chapter, for example, Charles's teacher thinks he says his name is “Charbovari.” He fails to make his own name understood.

Furthermore, he appears to be physically repulsive to Emma's eyes to a point where  Emma detests him. At a point she even ‘whereas a man, surely should know everything; excel in a multitude of activities, introduce you to passion in all its force [...] But this one had nothing to teach; knew nothing, wanted nothing. He thought she was happy; and she hated him for his placid immobility’[9]

Flaubert portrays his two protagonists of the novel to be both very distant from the actual reality. This foreshadows their marriage wont be successful in the end. In fact at the end of part one Emma throws her bridal bouquet into the fire before moving to Yonville. ‘She watched it burn’[10] This event symbolizes her rejection of the marriage. By distracting from her reality she rejects Charles bringing to an end Madame Bovary.