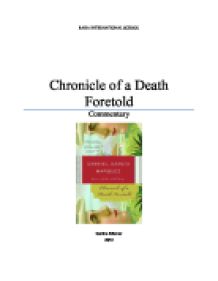 RAHA INTERNATIONAL SCHOOL Chronicle of a Death Foretold Commentary Carina K�rner 2012 Chronicle of a Death foretold Commentary Carina K�rner This passage from the novel in Chronicle of a Death foretold takes place at the end of chapter 2, where Bayardo San Roman, who had just gotten married to Angela Vicario, returns her to her family's house because he found out that she wasn't a virgin. The characters in this passage that are mainly involved are Angela Vicario, Pura Vicario; Angela's Mother; Pedro and Pablo Vicario; the two twins; her brothers; and of course Bayardo San Roman; her husband/ ex-husband. I will be looking at the characters and their relationships between one another, the structure of the passage - how suspense is built up, and the last 2 paragraphs of the passage. This chapter describes the events leading up to Santiago Nasar's murder, beginning with one of the main reasons why he was killed - Bayardo San Roman. He arrived to the small unknown Latin town 6 months before he married Angela Vicario. At first no one really liked him, but with the time people started to get more and more impressed with his personality. ...read more.

This may seem quite harsh and demanding, but the way she raised her daughters, is in such a way that they can do anything to make their husband or future husband happy. All of these relationships between Angela Vicario and the other characters, especially her mother, and quickly forgotten when reading this passage. The descriptions of how she is being treated and how obviously ashamed she is, are very direct. Bayardo returns his wife to her family after finding out that she is no longer a virgin. Yet he doesn't show anger, but instead only disappointment. Although we would expect him to be very aggressive, "...he softly pushed his wife into the house without speaking..." After he leaves, her mother beats her for approximately two hours: "she was holding me by my hair with one hand and beating me with the other with such rage that I thought she was going to kill me!" The structure of this passage can be very confusing at times. The author usually uses quite short sentences to build up suspense, in such a way that we are eager to continue reading. ...read more.

She looked for it in the shadows, she found it at first sight among the many, many easily confused names from this world and the other, and she nailed it to the wall with her well-aimed dart, like a butterfly with no will whose sentence has always been written. 'Santiago Nasar,' she said." 'She only took the time necessary to say the name.' This is probably the most important line of this paragraph, because the author uses a short sentence and very little vocabulary to create such a line that tells the reader everything they need to know but then again build up more suspension so that we are willing to read the last couple if lines although we subconsciously already know what name she is going to say. Overall, the relations between characters, the structure of the passage and the last 2 paragraphs as a whole are 3 points that make up a passage that seems mainly descriptive but at core is very intense. Gabriel Garcia Marquez mostly short sentence structure and little vocabulary to build up suspense in a passage that makes up a major part of his book 'Chronicle of a Death Foretold'. This passage is a vital part to the entire story and without it the novel wouldn't be as good as it is now. ?? ?? ?? ?? ...read more.