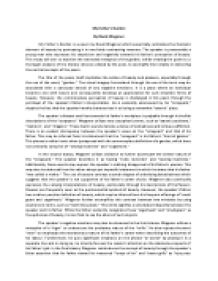 ﻿My Father?s Garden By David Wagoner My Father?s Garden is a poem by David Wagoner which essentially centralizes the thematic element of beauty by portraying it in two fairly contrasting manners. The speaker is presumably a young man who expresses his skepticism and negativity towards his father?s perception of beauty. This essay will aim to examine the extended metaphor of the garden, whilst treating the poem to a thorough analysis of the literary devices utilized by the poet, to exemplify their vitality in delivering the central concepts of the poem. The title of the poem itself implicates the notion of beauty and pleasure, especially through the use of the word, ?garden.? The visual imagery formulated through the use of the term may be associated with a sanctuary devoid of any negative emotions. It is a place where an individual becomes one with nature and consequently develops an appreciation for such simplistic forms of beauty. ...read more.

This may also be deduced from his rather abrupt yet impactful statement in which he states that his father ?was called a melter.? The use of caesura conveys a certain degree of underlying detachedness which suggests that the speaker is not supportive of his father?s career choice. Wagoner also continually expresses the varying interpretations of beauty, particularly through his descriptions of the flowers. Flowers are frequently seen as the quintessential symbols of beauty. However, the speaker?s father has a rather peculiar definition of beauty, which may be inferred from his frequent offerings of ?small gears and cogwheels.? Wagoner further exemplifies this contrast between two mindsets by using oxymoronic terms, such as ?teeth like petals.? This simile signifies a very blatant disparity between the speaker and his father. While the father evidently recognizes these ?cogwheels? and ?small gears? as the epitomes of beauty, his son fails to see the allure of such objects. The speaker?s negative emotions may also be observed in the third stanza. ...read more.

This concept is predominantly emphasized through Wagener?s use of the extended metaphor of a garden. By portraying the speaker?s father?s garden as a ?scrapyard?, Wagener has essentially suggested the beauty is entirely universal. The poem is comprised of four sixaines which do not follow a definite rhyme scheme. The absence of rhyme may reflect the lack of harmony between the speaker?s interpretation of beauty and that of his father. The tone of the poem as a whole denotes a sense of bitter apathy and indifference. This may be inferred from the speaker?s use of contrasting ideas which create an acrimonious mood in the poem. Furthermore, Wagoner uses very evocative forms of diction, such as ?satanic? and ?demons? to precisely express the speaker?s fear and skepticism towards his father?s workplace. The fundamental thematic element of beauty is at the crux of this poem. This concept is continually exemplified through the poet?s portrayal of two conflicting vantages. Perhaps, in writing this poem, Wagoner hoped to convey the notion that beauty is truly objective and is entirely unique to every individual. ...read more.