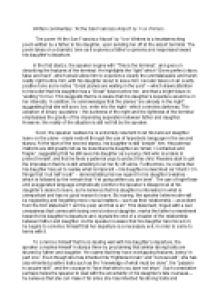 ﻿Written commentary: ?At the San Francisco Airport? by Yvor Winters The poem ?At the San Francisco Airport? by Yvor Winters is a heartwrenching poem written by a father to his daughter, upon sending her off at the airport terminal. The poem takes on a dramatic tone as it explores a father?s opinions and responses toward his daughter?s departure. In the first stanza, the speaker begins with ?This is the terminal?, and goes on describing the features of the terminal. He highlights the ?light? which ?Gives perfect vision, false and hard?, which would allow him to experience clearly the unmistakeable and harsh reality right before him, with his daughter about to leave him. He later takes on an overtly positive tone as he notes ?Great planes are waiting in the yard? ? which draws attention to his belief that his daughter has a ?Great? future before her, and that a bright future is ?waiting? for her. This suggests that he is aware that his daughter?s departure would be in her interests. In addition, he acknowledges that the planes ?are already in the night?, suggesting that she will soon, too, enter into the night - which connotes darkness. The adoption of binary opposites ? the darkness of the night and the lightness of the terminal emphasises the gravity of the impending separation between father and daughter. ...read more.

He claims that they have overlapping features, being ?in part one?. Even though she has inherited his ?frightened brain? and ?nervous will?, she has also inherited positive traits such as the ?knowledge of what must be done?, the ?passion to acquire skill?, and the courage to ?face that which you dare not shun?. Such consolation perhaps helps the speaker to deal with the uncertainty of his daughter?s fate overseas ? he believes that she can make it far since she has inherited his strong traits and determination, such that he would not have to worry about her life overseas. However, despite such attempts to convince himself about her ability to survive independently overseas, this is undermined by the forth stanza. In the forth stanza, readers are alerted to the fact that the very reality of his daughter?s departure remains an earth-shattering change for the speaker. He uses gloomy imagery in describing his overpowering emotions in response to the realisation that his daughter was leaving soon ? he claims that he experiences the ?rain of matter upon sense?. He further admits that as the truth of the matter hits him, it ?Destroys me momentarily? ? which suggests that he is devastated by his daughter?s impending departure, to the point where he has lost his rationalising abilities. ...read more.

However, this is undermined by the dramatic closing of the poem. The last line draws the reader?s attention to the severity of the separation - the speaker is not only aware that he will be separated from his daughter, evident through the recognition that he will remain ?in light? while his daughter is away ?in the night?, but he is also aware that he can only remain ?in light, and nothing else?. This suggests that their separation may perhaps be permanent, and that he has become aware of that. His sad fate as a father whose daughter has left him is amplified by the claim that he will remain ?awake? ? which points to a devoted willingness to wait for her until she returns, as well as the possibility of him spending sleepless nights missing her, upon her departure. In conclusion, the poem convincingly conveys the speaker?s attitude towards his daughter?s departure at various points in time while at the terminal. At the beginning, he notes the presence of the planes on which his daughter will leave him, hinting to ensuing separation. This progresses until the end, where he indeed separates from his daughter as she flies off - he is saddened by the fact that he is no longer needed in her life, and begins to long for her return. ...read more.