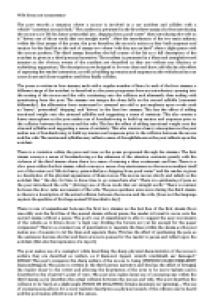 ﻿Wife hit moose commentary The poet records a situation where a moose is involved in a car accident and collides with a vehicle ??sometime around dusk.?? The accident is presented in the first three stanzas by first introducing the moose as it ?lift his heavy primordial jaw, dripping from pond water?? then introducing the wife as it ??drives one of those roads that cut straight north??. After the introduction of the two main subjects within the first stanza of the poem, the poet describes the moose?s action as they built suspense and tension for the final hit at the end of stanza two where ?wife hits moose hard?? after a slight pause with the moose ponders. The third stanza describes the full course of the hit as a full description of the accident in given in a third personal narrative. The accident is presented in a blunt and straightforward manner as the obvious events of the accident are described as they are without any illusions or underlying suggestions. The descriptions are designed to be very clear and short, add this has the effect of capturing the reader?s attention, as well as building up tension and suspense as the vehicle and moose come closer and closer together, until they finally collides. ...read more.

(But also the impression of a report.) The poet makes use of a metaphor while describing the sharp physical characteristics of the moose's antlers, they are described as 'antlers- as if diamond- tipped- scratch windshield, ear damaged.?? SIMILE! The poet?s compares the sharp antlers of the moose to being (PREVIOUS HARD/RESILIENT) diamond0tipped. The poem is written in the third person narrative and this has the effect of bringing the reader closer to the writer and allowing the description of the even to be more realistic and is described in the observer?s point of view. The poet also makes large use of onomatopoeia within the third stanza as he describes the actual collision between the moose and wife. The poet describes the collision to be ?hard, at a slight angle (FUCUS ON QUALITIES) (breaks slammed, car spinning)? The use of onomatopoeia allows for a more realistic description as physical sounds of the collision can be heard and the poet makes effective use of the senses. The poem is written in a slight broken grammar, and there is a wide use of punctuation; this suggests a sense of panic as the poet is unable to write logically and in full sentences. The description seems to be mad up of short, clear, observations combined together (THIS NEEDS CLARIFICATION- OFF THE POINT HERE) ...read more.

The speaker takes on a role as an observed as they view the accident from a third person?s perspective and both the moose and wife takes on an experimental role for the poet and speaker. The poets use of repetition in asking the rhetorical question of whether the character of either the moose, wife, or speaker believes in supreme intelligence brings both attention and focus to the reflection of ?supreme intelligence?. The short last line within the last stanza where the speaker answers their own question with ??yes, Thank you. (WHAT TYPE OF TEXT NORALLY ENDS WITH ?THANK YOU??) is conclusive and brings a final end to the poem. In conclusion, I feel that the poet has successfully presented the purpose of conveying the contrasts of the natural and man-made world through the comparison of the moose and wife. The poet?s use of repetition in the second stanza where the ??wife his moose, hard?? is a repetition of the title and suggests that this is symbolic. There is also contrast between the description of the environment between nature and manmade as the wife ?cuts straight north? along the highway, which divides the forest. There is a contrast between the man made structure of the highway, and the natural forest. This pots emphasis upon the stark differences, abilities and capabilities of the moose and the wife. ...read more.