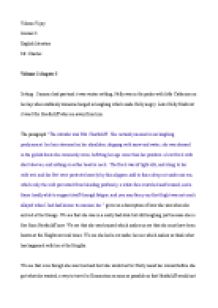 ﻿Vikram Vijay Journal 3 English literature Mr. Charles Volume 2 chapter 3 Setting : Summer had past and it was winter settling, Nelly was in the parlor with little Catherine on her lap when suddenly someone barged in laughing which made Nelly angry. Later Nelly finds out it was Mrs. Heathcliff who ran away from him. The paragraph ?The intruder was Mrs. Heathcliff. She certainly seemed in no laughing predicament: her hair streamed on her shoulders, dripping with snow and water; she was dressed in the girlish dress she commonly wore, befitting her age more than her position: a low frock with short sleeves, and nothing on either head or neck. The frock was of light silk, and clung to her with wet, and her feet were protected merely by thin slippers; add to this a deep cut under one ear, which only the cold prevented from bleeding profusely, a white face scratched and bruised, and a frame hardly able to support itself through fatigue; and you may fancy my first fright was not much allayed when I had had leisure to examine her.? gives us a description of how she was when she arrived at the Grange. We see that she was in a really bad state but still laughing just because she is free from Heathcliff now. We see that she was bruised which makes us see that she must have been beaten at the Heights several times. We see she had a cut under her ear which makes us think what has happened with her at the Heights. We see that even though she was tired and hurt she would not let Nelly mend her wound before she got what she wanted, a way to travel to Gimmerton as soon as possible so that Heathcliff would not be able to get her, the phrase ?She insisted on my fulfilling her directions, before she would let me touch her; and not till after the coachman had been instructed to get ready, ...read more.

growled the lad. 'You'll see me _what_!' asked Catherine in surprise. 'Damned--thou saucy witch!' he replied. 'There, Miss Cathy! you see you have got into pretty company,' I interposed. 'Nice words to be used to a young lady! Pray don't begin to dispute with him. Come, let us seek for Minny ourselves, and begone.? shows us that how when Cathy ordered Hereton to get her horse in a rude manner treating him as a servant at the grange made him angry and he could not stand without telling her a few rude words. To this Nelly took a opportunity to get back on Cathy and told her in a teasing manner to look at what company she has got herself. Nelly tells her to leave him and get her horse themselves and leave for the Grange immediately. Although to this Cathy got so shocked by Hereton's behavior and in anger and despair shouted at the maid to get her pony and dog. To this the maid replied in a polite manner and told Cathy to be civil. In addition to this the maid told Cathy that Hereton is her cousin which made Cathy really sad and angry thinking how could a person like Hereton be her cousin. We can say this because of the phrase ?Oh, Ellen! don't let them say such things,' she pursued in great trouble. 'Papa is gone to fetch my cousin from London: my cousin is a gentleman's son. That my--' she stopped, and wept outright; upset at the bare notion of relationship with such a clown.? in which we see Cathy started weeping how could Hereton be her cousin. Later on we get a explanation why Hereton is this way. Nelly tells us that he had built a strong body and good features but Heathcliff never gave him a chance to be educated. His clothes were dirty because of the jobs he had to do at the Heights. ...read more.

Although the phrase ?I'm sorry I hurt you, Linton,' she said at length, racked beyond endurance. 'But I couldn't have been hurt by that little push, and I had no idea that you could, either: you're not much, are you, Linton? Don't let me go home thinking I've done you harm. Answer! speak to me.? shows us that Cathy felt extremely guilty for her actions and wished for forgiveness from Linton. The sensitive lady was so sad at her actions she cried with all her might which makes us realize once again how sensitive this young girl is and how weak Linton has become. Later we see that when Nelly wanted Cathy to leave the Heights Linton told Cathy that she caused him to be more ill now and she has to visit again to cure what she did. The phrase ?You must come, to cure me,' he answered. 'You ought to come, because you have hurt me: you know you have extremely! I was not as ill when you entered as I am at present--was I?? shows us that now he was blackmailing the sensitive girl to visit him again just like how Heathcliff manipulated her soft feelings. Lastly we see when Cathy and Nelly returned to the Grange and were off to bed the phrase ?I remarked a fresh colour in her cheeks and a pinkness over her slender fingers, instead of fancying the line borrowed from a cold ride across the moors, I laid it to the charge of a hot fire in the library.? tells us that Nelly caught a cold due to walking in the cold weather. The part where Nelly tells us that Cathy had a fresh color in her cheeks tells us she was up to some mischief which we can assume was to visit Linton during the night as she promised she will escaping the Grange ...read more.