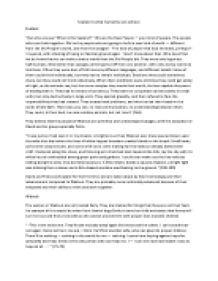 Transfer-Encoding: chunked ﻿Sealand is what humanity can achieve Sealand "But who are you? What is this Sealand?' ' We are the New People ? your kind of people. The people who can think-together. We're the people who are going to build a new kind of world ? different from the Old People's world, and from the savages'.' 'The kind of people that God intended, perhaps?' I inquired, with a feeling of being on familiar ground again. 'I don't know about that. Who does? But we do know that we can make a better world than the Old People did. They were only ingenious half-humans, little better than savages; all living shut off from one another, with only clumsy words to link them. Often they were shut off still more by different languages, and different beliefs. ...read more.

A brighter sun than Waknuk ever knew poured down upon the wide blue bay where the lines of white-topped breakers crawled slowly to the beach. Small boats, some with coloured sails, and some with none, were making for the harbour already dotted with craft. Clustered along the shore, and thinning as it stretched back towards the hills, lay the city with its white house's embedded among green parks and gardens. I could even make out the tiny vehicles sliding along the wide, tree-bordered avenues. A little inland, beside a square of green, a bright light was blinking from a tower and a fish-shaped machine was floating to the ground. "(198-199) David and Petra see Sealand for the first time and are taken aback by their technology and their advancement compared to Waknuk. They are probably more technically advanced because of their telepathy and their ability to think and work together. ...read more.

.' " (71-72) Waknuk is very religious. They have decided that everything must be a certain way this includes the "True Image" (17-20). Waknuk also is ruled by the Inspector and Joseph Strom (the men). Their dominance and leadership are shown when the Dakers' cat , a cat with no tail is claimed as an offense and ordered to be killed. Even though there are cats with no tails, Joseph Strom did not know and when he found out he simply ignored the fact (37). Another instance is when they begin torturing Katherine and Sally " ' They've broken Katherine. They've broken her. . . Oh, Katherine, dear . . . you mustn't blame her, any of you. Please, please don't blame her. They're torturing her. It might have been any of us. She's all clouded now. She can't hear us . . . Oh, Katherine, darling . . .' ".Her thoughts dissolved into shapeless distress (130). They do what they want to do and have complete control over what goes on. ...read more.