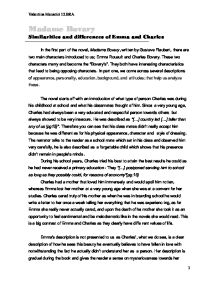 Comparison of emma and charls in madame bovary

Madame Bovary Similarities and differences of Emma and Charles In the first part of the novel, Madame Bovary, written by Gustave Flaubert, there are two main characters introduced to us; Emma Rouault and Charles Bovary. These two characters marry and become the "Bovary's". They both have interesting characteristics that lead to being opposing characters. In part one, we come across several descriptions of appearance, personality, education, background, and attitudes; that help us analyze these. The novel starts off with an introduction of what type of person Charles was during his childhood at school and what his classmates thought of him. Since a very young age, Charles had always been a very educated and respectful person towards others but always showed to be very insecure. He was described as "[...] country lad [...] taller than any of us (pg15)". Therefore you can see that his class mates didn't really accept him because he was different as for his physical appearance, character and style of dressing. The narrator talks to the reader as a school mate which sat in his class and observed him very carefully, he is also described as a forgettable child which shows that his presence didn't remain in people's minds. During his school years, Charles tried his best to attain the best results he could as he had never received a primary education- They "[...] postponed sending him to school as long as they possibly could, for reasons of economy"(pg.18) ...read more.

And she ended by asking him for a dose of medicine and a little more love (pg.25)" He is a very fussy and demanding man that has nothing to give to people. "this one had nothing to teach; know nothing, wanted nothing (pg.54)". This shows a clear difference between Emma and Charles because she tried to make him happy all the time and loved sharing her abilities and her education with him. "Sometimes he came home late, [...] he would want something to eat and as the maid had gone to bed, Emma looked after him. (pg.55) and he would take everything for granted and was proud of having such a wife when he did nothing to deserve her or to thank her. Emma believed in love and shows to be a passionate love dreamer "In the pocket of her apron she always kept some novel or other [...] they were all about love and lovers (pg.49-50)" Now to her it is just a memory that feeds her discontent toward her life. As to her dreams, she has a conflict with her day to day life because she is not capable of achieving those emotions she reads from those books, she doesn't face with the problems of reality that at times are hidden in romantic stories. ...read more.

A small detail I found showing the differences of education between Emma and Charles, comes around where we talk about their religious beliefs and how their parents taught them to approach the church. Charles father: " to jeer at church processions" therefore Charles was brought up with this type of education, Emma instead was brought up very differently because they taught her the importance on the church "When she went to confession, she invented small sins in order to stay there longer(pg.48)", even though she did it in a sense of hypocrisy since she was in love with the words in the bible that connected to love. As a conclusion I would say that all the characters in the first part of Madame Bovary are very interesting because they all have their small characteristics which make their characters contrast one another. Moreover I think that there are some characters that look opposing one to another but they have some things in common anyway. I like the way characters are linked and interact with each other in the book because you can see that in this first part, the most underlined topic by Gustave Flaubert is the description of the character and the details on their ways of being through different peoples eyes. ?? ?? ?? ?? Valentina Menarini 12.BRA 1 ...read more.

This is an intelligent essay, which answers the question appropriately and approaches it using both the general issues presented by the novel, as well as the more subtle textual innuendos. The introduction is clear about the argument of the essay ...

This is an intelligent essay, which answers the question appropriately and approaches it using both the general issues presented by the novel, as well as the more subtle textual innuendos. The introduction is clear about the argument of the essay and offers us an insight into the themes that will be elaborated upon. In the main body of the essay, we are given a good balance of differences and similarities between Charles and Emma, and the fact that several individual and original points are made means that the writer has acquainted him/herself with the text very well. Examples, comparisons and analysis of these comparisons run throughout the essay regularly, giving it a measured pace. The conclusion, unfortunately, disappoints; it is vague and seems to introduce Ã¢â‚¬Å“all the charactersÃ¢â‚¬Â in the novel, who had no role to play in the essay at all. The writer should focus on what he has already said, rather than launching an entirely new initiative.

The differences and similarities between Emma and Charles are explored deeply and eloquently throughout the essay; many aspects of their characters, both psychological and social, are analysed well. The writer addresses the way each of them perceives love and passion, how they react to their surrounding realities and how they themselves are perceived. Indeed, the writer has managed to answer the question by picking out some of the novel's more important themes Ã¢â‚¬â€œ and appropriate quotations Ã¢â‚¬â€œ and juxtaposing Emma and Charles within them. This is done skilfully Ã¢â‚¬â€œ each paragraph gives us a sense of direct and textually close comparison. Oddly, there is a contradiction in the essay regarding Charles; at first, the writer describes him as Ã¢â‚¬Å“educatedÃ¢â‚¬Â, only to defy his own words in the next paragraphs and state instead that he Ã¢â‚¬Å“was a simple country lad which received no educationÃ¢â‚¬Â. As this is a significant part of the essay, where we are meant to compare Emma and Charles' upbringing, the line of the argument weakens somehow. But apart from this slip-up, the analysis is perceptive and focused. One of the examples would be the penultimate paragraph, which deals with religion. The analysis is rather impressive here, as the writer has picked two very short phrases and compared them in detail in the context of their respective bearers. In order to better the essay, perhaps the writer could have focused on the subtle differences in speech between Charles and Emma, or the symbols associated with them Ã¢â‚¬â€œ this would have definitely made the essay even more competent.

Clear language, though not without mistakes. Phrases such as Ã¢â‚¬Å“very interestingÃ¢â‚¬Â should be avoided, as they are virtually meaningless. At times, the essay is too personal (use of Ã¢â‚¬Å“I...Ã¢â‚¬Â) and resembles an opinion rather than a literary analysis. The writer should pay more attention to commas; some sentences, for instance, should have been split up. Moreover, there are some spelling mistakes, e.g. Ã¢â‚¬Å“peoples eyesÃ¢â‚¬Â, Ã¢â‚¬Å“the bibleÃ¢â‚¬Â or Ã¢â‚¬Å“she is competent womanÃ¢â‚¬Â (moreover, in the latter example, the word Ã¢â‚¬Å“competentÃ¢â‚¬Â has not been used correctly). These kinds of mistakes are strange to see in an essay of relatively high intellectual calibre, and are certainly not acceptable at this level of qualification. But on the other hand, the writer is consistently clear in what he/she attempts to say, the writing is succinct and the structure well-built.