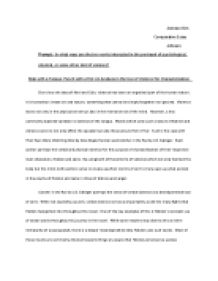 ﻿Joonsoo Kim Comparative Essay Johnson Prompt: In what ways are the two works interested in the portrayal of psychological, physical, or some other kind of violence? Stab with a Tongue, Punch with a Fist: An Analysis in the Use of Violence for Characterization Ever since the days of Abel and Cain, violence has been an engrained part of the human nature. It is humanity?s innate sin and nature, something that cannot be simply forgotten nor ignored. Violence exists not only in the physical sense but also in the mental sense of the mind. However, a less commonly explored variation is violence of the tongue. Words which carry such a nature of hatred and violence serve to not only affect the speaker but also those around him of her. Such is the case with Their Eyes Were Watching God by Zora Neale Hurston and Catcher in the Rye by J.D. Salinger. Each author portrays the verbal and physical violence for the purpose of characterization of their respective main characters, Holden and Janie. By using both of these forms of violence which not only harmed the body but the mind, both authors serve to create a perfect storms of sort to truly open up what existed in the psyche of Holden and Janie in times of distress and anger. Catcher in the Rye by J.D. Salinger portrays the sense of verbal violence as a developmental tool of sorts. While not explicitly a punch, verbal violence serves as importantly as did the many fights that Holden had gotten into throughout the novel. ...read more.

As a result, Holden?s refusal to conform to this ?phony? standard resulted in his loneliness. The physical violence serves merely as a gate to open up Holden?s mind. Through this, the reader can truly grasp the inner workings of Holden?s mind which ultimately serves to redefine his image from the beginning of the novel as a rebellious youth into simply a lonely wanderer in search of a companion. In Their Eyes Were Watching God by Zora Neale Hurston, verbal violence also holds a key role in defining characters, mostly serving to develop Janie. For the most part, Janie displays a degree of verbal violence towards Joe Starks, her second husband, in some portions of the novel. Throughout her marriage with Joe, Janie is put under tight control and not allowed to freely mingle with the community, making her a self-made outcast of sorts. Joe was jealously protective of Janie and only saw her as an object. However, her marriage with him came to an end when he had fallen ill. Ironically enough, Janie had taken that opportunity to verbally insult him for all he had done towards her and causes Joe to die at that point with Joe cursing Janie as well. Represented here was Joe?s dependence upon Janie as well as Janie?s separation from society. When Joe falls ill, Janie begins to verbally abuse him, and a clear connection is made. In order to stay with Joe, Janie needed to display a degree of peace. ...read more.

Both characters had discovered a revelation of each of their own. Janie had discovered a world that was innately violent while Holden had come to terms with one he already knew was violent and dark. Such a type of closure for the characters allows for them to show the journey they had gone through. From the naïve boy and girl that Holden and Janie were to the adults that they were in the end, it could be safely said that the violence which was so often vilified could also be used as a tool for self-exploration and revelation. Violence in the common term is naturally frowned upon as it implied attacking or harming another. However, as harsh as it is, violence is what makes the world continue to go on. It is a built in part of human nature that cannot be merely ignored. Both authors in the end managed to show such transformation and maturation in a world where it did not seem so. Regardless of whatever opinion one may have, there is no denying that both the characters of Holden and Janie went through changes whether it was for the better or for the worse. However, as with every hero from Odysseus to Janie who goes on an adventure, there is almost always a happy ending. While the new world that both of them see may not be as happy or bright as before, the truth before them may be enough to clear a path that replaces optimism with true beauty and clarity. ...read more.