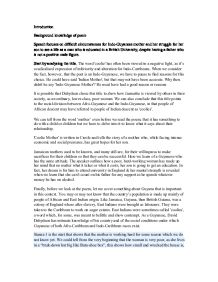 Introduction Background knowledge of poem Speech focuses on difficult circumstances for Indo-Guyanese mother and her struggle for her son to see a life as a man who is educated in a British University, despite having a father who is not a positive male figure. Start by analysing the title. The word 'coolie' has often been viewed in a negative light, as it's a radicalised expression of inferiority and alteration for Indo-Carribeans. When we consider the fact, however, that the poet is an Indo-Guyanese, we have to pause to find reasons for this choice. He could have said 'Indian Mother', but that may not have been accurate. Why then didn't he say 'Indo-Guyanese Mother'? He must have had a good reason or reasons. It is possible that Dabydeen chose this title to show how Jasmattie is viewed by others in their society, as an ordinary, lower-class, poor woman. We can also conclude that this title points to the racial division between Afro-Guyanese and the Indo-Guyanese, in that people of African descent may have referred to people of Indian descent as 'coolies'. We can tell from the word 'mother' even before we read the poem, that it has something to do with a child or children but we have to delve into it to know what it says about their relationship. ...read more.

of Indian families and the Indo-Guyanese community is to maintain a distinctive and separate identity clearly derived from their attachment to Indian culture. However, British planters had kept their Indian workers on their estates and prevented them from acquiring an education and mainstream occupations. Therefore this line emphasizes the tasks a typical lower class Indo Guyanese woman would undertake such as chopping wood and feeding farm animals, and other household and agricultural tasks. Furthermore the authority and control over such women is expressed by the line 'for this body, and that body, and every blasted body' as it clearly shows that they were expected to keep a lot of people satisfied by their manual labour, in a sense of dislike and hate for these people through the word 'blasted'. Dabydeen uses the image of water very effectively to express her hardships. He does this by contrasting the amount of water she fetches, with the amount she receives for herself. The image of the whole slow flowing Canje River is contrasted with that of one bucket, showing how she puts in a lot of effort at times when she works, to get back very little in return. In stanza 2 we learn of the pain she experiences in her work. ...read more.

Since parents pass their beliefs on to their children and subsequently to their grandchildren, family values have remained constant, and the possibility of family and personality conflicts have been significantly lessened. It is also quite common for adults to continue in the family business or farm and to seek to pass it on to yet another generation. However as we learn in stanza 3, Jasmattie values her son and has no intentions for him to continue working like she does. Instead she wants him to be educated. We become aware with the situation as to why Jasmattie has been working so hard all the time. She has great hopes for her son, Harillal, who she wants to go to England University. Last stanza Focuses on habits her son must pick up to have a positive future in Georgetown university All building up to last line, impact And she son Harilall got to go to school in Georgetown, Must wear clean starch pants, or they go laugh at he, Strap leather on he foot, and he must read book, Learn talk proper, take exam, go to England university, Not to turn out like he rum-sucker chamar dadee. Chamar low cast, 'cleaner/servant' Indian/Pakistani common term The last line lets the reader know that the mother is against letting her son turn out like his father. This shows that the father is no good. Rum-sucker indicates that the father is a drunkard. ...read more.