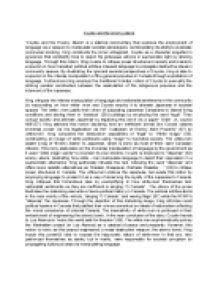 Coyote and the Enemy Aliens is a satirical commentary that explores the employment of language as a weapon to manipulate societal stereotypes; contemplating its ability to eradicate communal bonding.

Transfer-Encoding: chunked ﻿Coyote and the enemy aliens ?Coyote and the Enemy Aliens? is a satirical commentary that explores the employment of language as a weapon to manipulate societal stereotypes; contemplating its ability to eradicate communal bonding. King constructs the minor antagonist, Coyote as a character engulfed in ignorance that constantly tries to depict his grotesque actions in euphemistic light by altering language. Through this notion, King is able to critique power structures in society and is able to expound on how Canadian political entities misused language to propagate destructive ideas in community spaces. By illustrating the ignorant societal perspectives of Coyote, King is able to expound on the intense manipulation of the general populous in Canada through exploitation of language. Furthermore,King employs the traditional trickster notion of Coyote to exemplify the striking parallel constructed between the assimilation of the indigenous populous and the interment of the Japanese. King critiques the intense manipulation of language and nationalist sentiments in the community by expounding on how white- men and Coyote employ it to alienate Japanese in societal spaces. The white- men justify their crime of subjecting Japanese Canadians to dismal living conditions and storing them in ?livestock? (58) buildings by employing the word ?legal?. They corrupt society and alienate Japanese by legalizing this crime via a paper? Order -in- council 469?(57). ...read more.

King showcases the devastating connotations of manipulation of language by expounding on how it is employed to promote societal stereotypes and create ignorant notions of society. King employs an ignorant, trickster persona of Coyote to critique the intense discriminatory social perspectives present in communal spaces. Coyote is engulfed in ignorance and fails to contemplate the consequences of his actions in a pragmatic manner. His intense ignorance is illustrated when he converses with the narrator telling how Enemy Aliens are ?...not like you and me? (60). He has a prejudiced notion of society and fails to identify the striking similarity in physical characteristics between him and the Japanese. This discriminatory mindset alludes to the grotesque societal perspectives constructed in Canada through the manipulation of language. Throughout the prose, Coyote compares the Japanese to the notion of ?livestock? and deems them inferior in society by being imparting with animalistic characteristics. He calls the narrator ?mistaken? (60) when questioned upon about the similarity between him and the Japanese. His ignorance reaches a standpoint that he begins to feel that his actions have positive connotations on the general lifestyle of the Japanese when he notices their emotional distress and comments, ?after everything I have done for them? (64). He achieves self-proclaimed importance when he comments that his job is more important than being ?truthful?, ?reliable?, ?fair? and ?generous? (56). ...read more.

But the narrator seems to offer alternatives of 1940, 1941 and 1942, showcasing a distinct repetition of plot points annually. Moreover, king repeats the plot points of “...Coyote comes by my place. My good place by the river” (68) frequently in the prose. Furthermore, In the near conclusion of the prose, King also comments, “That Coyote will come back”.The repetition of plot points expounds on the infinite nature of oppression and ignorance in the universe and depicts the sombre reality that such grotesque crimes against humanityâ âwillâ ânotâ âceaseâ âtoâ âexistâ âuntilâ âtheyâ âareâ ârestrictedâ âbyâ âtheâ âmodernâ âsociety. Through the prose, King attempts to critique power structures in society by expounding on the intense manipulation of language to legalize crime. The mythical trickster figure of Coyote is employed to exemplify the loop-holes of community, by illustrating how Coyote incorporates the syntax of the term, “legal” to obtain immense power in societal spaces. By equating a “Coyote story” to a “Canadian story”, King elaborates on the ignorant distinct scenes of Canadian socio-political history and satirizes the irrational mindset of society. The notion of absent voices is incorporated to illustrate how Japanese do not have an opportunity to oppose the legalization of the internment. King also illustrates the contrasting incorporation of language in aboriginal and European cultures. The aboriginal populous employs language as a medium of communal bonding via storytelling. Meanwhile, the white-men incorporate language as a catalyst for communal dysfunctionality and manipulation of citizens by legislature. ...read more.