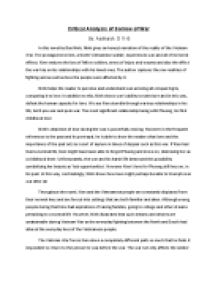 ﻿Critical Analysis of Sorrow of War By: Aadharsh. D 11-B In this novel by Bao Ninh, Ninh gives an honest narration of the reality of the Vietnam War. The protagonist is Kien, a North Vietnamese soldier, experiences war and all of its horrid effects. Kien endures the loss of fellow soldiers, stress of injury and trauma and also the effect the war has on his relationships with his loved ones. The author captures the raw realities of fighting and as well as how the people were affected by it. Ninh helps the reader to perceive and understand war as being all conquering by comparing it to love. In addition to this, Ninh shows war?s ability to taint love and in this way, defeat the human capacity for love. We see Kien stumble through various relationships in his life, both pre-war and post-war. The most significant relationship being with Phuong, his first childhood love. Ninh?s depiction of love during the war is powerfully moving. However in the frequent references to the past and its portrayal, he is able to show the readers that love and the importance of the past acts as a sort of asylum in times of despair such as this war. ...read more.

When the war ends and soldiers are brought back into a world of peace with no fighting, they find themselves not being able to adjust to a life without violence or cruelty. To them, they cannot actually be men. This shows us a world without real men. The characters in this novel are particularly interesting because they are dynamic due to the transformations they endure throughout the novel. At the end of the war when Kien returns to Hanoi, there were no ceremonies, drums or whatever to welcome back the victorious soldiers. Kien has a sense of bitterness however he believes every bit of their sacrifice is worth it. Ultimately, Kien changes from a innocent young teen full of ideals to a man who has lived the horrors of war and felt the grief which causes him to reminisce. Despite all this, Kien grasped strongly to reality and accepted the fate of being a victim of the war. It made him stronger mentally but at the same time took away the things that prevented a human being from turning into a ruthless cold-blooded man hardened by his experiences. ...read more.

It was as controversial as Robert S. McNamara?s war confessional, ?In Retrospect? is in the United States today. The Sorrow of War forced the Vietnamese people to confront a side of the war that they rarely discuss. Although the book passed through the government?s censors, it faced much criticism from both the Socialist Republic of Vietnam and veterans of the war. Ninh has not published since. It is also comparable to the German confessional on the World War 1, ?All Quiet on the Western Front?, as both portray the hardships faced by the many faceless soldiers fighting for their country. This is a hauntingly powerful Vietnam War novel. Ninh is able to portray the story as both a war novel and anti-war novel at the same time. There had been much rape, bombing, killing and horrific destruction. But it is not only an account on the horrors of war, but also touches upon the topics of uncertainty, search for one owns identity and self-respect. It is the author?s statement about honesty and the journey towards self-realization through love and post-traumatic shock. Love is lost, regained and then lost again. However, overall there is an honesty and truth that one?s soul will always survive despite the cruelty and barbarism of men towards each other in war. ...read more.