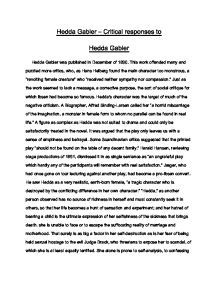 Hedda Gabler was published in December of 1890. This work offended many and puzzled more critics, who, as Hans Heiberg found the main character too monstrous, a “revolting female creature” who “received neither sympathy nor compassion.” Just as the work seemed to lack a message, a corrective purpose, the sort of social critique for which Ibsen had become so famous. Hedda’s character was the target of much of the negative criticism. A Biographer, Alfred Sinding-Larsen called her “a horrid miscarriage of the imagination, a monster in female form to whom no parallel can be found in real life.” A figure as complex as Hedda was not suited to drama and could only be satisfactorily treated in the novel. It was argued that the play only leaves us with a sense of emptiness and betrayal. Some Scandinavian critics suggested that the printed play “should not be found on the table of any decent family.” Harald Hansen, reviewing stage productions of 1891, dismissed it in as single sentence as “an ungrateful play which hardly any of the participants will remember with real satisfaction.” Jæger, who had once gone on tour lecturing against another play, had become a pro-Ibsen convert. He saw Hedda as a very realistic, earth-born female, “a tragic character who is destroyed by the conflicting difference in her own character.” “Hedda,” as another person observed has no source of richness in herself and must constantly seek it in others, so that her life becomes a hunt of sensation and experiment; and her hatred of bearing a child is the ultimate expression of her selfishness of the sickness that brings death. she is unable to face or to escape the suffocating reality of marriage and motherhood. That surely is as big a factor in her self-destruction as is her fear of being held sexual hostage to the evil Judge Brack, who threatens to expose her to scandal, of which she is at least equally terrified. She alone is prone to self-analysis, to confessing her fears and dissatisfactions, which, in a different way, she reveals to the two men besides her husband who have pursued her: Judge Brack and Eilert Lovborg. Hedda has no real female friends, or anyone with whom she is either close or honest. In fact, she perceives each of the other women as a competitor. The fact that they seem at peace with themselves strongly annoys her and contributes to her increasing madness. As another person claimed, “the influence of her motherless, father-dominated upbringing is everywhere evident for her action.” Her inheritance reveals itself in her masculine behavior, her fondness for horses and pistols, or her excitement over the approaching contest between Eilert Lovborg and her husband George, or her interest in manipulating George into the male arena of politics, where she might exercise some real power. In some ways, she seems more masculine than George, who is a fussy foster-child of two aunts who is uninterested in politics and is afraid of Hedda’s handling of her father’s pistol. The other women in Hedda Gabler, even those unseen like Diana, have one thing in common with Hedda. They are women who have either failed to meet the male ideal of woman as wife-mother or have rejected it, as Hedda, the least suited to the task, wished to do. They also differ from Hedda in a truly significant way: they have made peace with themselves. And there in, they represent some of the limited alternatives to what society at large viewed as a woman’s primary goal — marriage and motherhood. Since Juliana is a selfless and loving person, she bears the burden with affection, dignity, and grace, all to Hedda’s annoyance. To Hedda, Rina’s death only means that Juliana may become a more frequent and disturbing visitor, even though Juliana confides to both Hedda and George that she plans to devote herself to caring for some other sickly person. She tells them that it’s such an absolute necessity for me to have one to live for. Juliana, a keen person, is simply beyond the selfish Hedda’s understanding. Juliana lives only for others, but Hedda lives only for herself. From Hedda’s point of view Juliana is both a fool and a threat.

Interestingly enough, it is because Hedda so completely dominates her play that her role soon became very attractive to actresses, and because it proved a great vehicle for the most talented and highly regarded among them, it evolved from its unhealthy beginning into a stage favorite. Hedda’s isolation from society, the everlasting struggle within herself to gain freedom, her cruel terror of humiliation - all generate sympathy for her pitiful troubles. However, an uncontrollable sense of horror is shown from her needless damage of all that was creative and unrealistic - representatives of a beauty that she cannot and will not be able to see or understand. Indeed, what the reader is left with is an ambiguous mixture of emotions which serves to damage the present comfort and simplicity with which many members of society have accepted its grossly unequal power structure of the time.