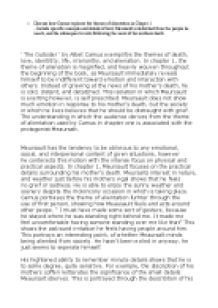 Discuss how Camus explores the themes of alientation in Chaper 1. - Include specific example and details of how Meursault is detatched from the people he meets, and the subsequent events following the news of his mothers death.

﻿1. Discuss how Camus explores the themes of alientation in Chaper 1. - Include specific example and details of how Meursault is detatched from the people he meets, and the subsequent events following the news of his mothers death. ' The Outsider ' by Albet Camus exemplifys the themes of death, love, identitity, life, irrariontliy, and alienation. In chapter 1, the theme of alienation is magnified, and heavily wouven throughout the beginning of the book, as Meursault immediately reveals himself to be indifferent toward emotion and interaction with others. Instead of grieving at the news of his mother?s death, he is cold, distant, and detatched. This isolation in which Meursault is exerting however, is self prescribed. Meursault does not show much emotion in response to his mother?s death, but the society in which he lives believes that he should be distraught with grief. The understanding in which the audience derives from the theme of alientation used by Camus in chapter one is associated with the protagonist Meaursalt. ...read more.

His hightened ability to remember minute details shows that he is to some degree, quite sensitive. For example, the discription of his mothers coffen reitterates the significance of the small details Meaursalt oberves. This is portrayed through the describtion of his mothers coffen. ? The lid was on, but a row of shiny screws, which hadnt been tightened down, stood out against the walnut stained wood?. This explicit detail in which each intricacy is described shows the audience the intellectutal capactiy in which Meursalt can withinhold to the physical world around him. This theme of separation is continually evident as the vigil scene continues. For example, the image of the elderly people gathered around the caretaker "nodding their heads" allows Meursault to conjure up the feeling that "that they were there to judge" him. His behavior only reinforces this division as he finds himself unable to share in the emotional connection and experience of the vigal. ...read more.

In conclusion, it is apparent that Camus has used alienation as a main theme in Chapter 1 through the main protagonist of Meaursault. Dialogue is simple throughout part one of 'The Outsider'. Camus does not provide direct explanations for Meursalts actions and response to events. Instread the reader can find unusual emphasis on the setting and physical aspects of events and characters throughout the unwiding of the novel. As previously mentioned, Meusault has complete control and concious awareness of his indifference towards the people around him, as well as social norms that provide for his distent behavior. Camus is trying to make his readers aware of Meaursalts human nature first and foremotst, before developing the novel further. In order to prove that Meursault is free to act the way he does, his inabilty to grieve over his mothers death should not be accepted in the eyes of society. Meursault is instead creating a principle in which he usses a convinced indifference to both hinder and object to the reality of societies establishments, and social behavior. ...read more.