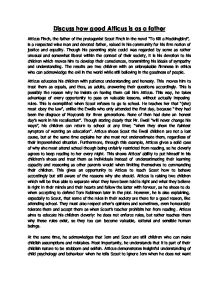 Discuss how good Atticus is as a father.

Discuss how good Atticus is as a father Atticus Finch, the father of the protagonist Scout Finch in the novel "To Kill a Mockingbird", is a respected wise man and devoted father, valued in his community for his firm notion of justice and equality. Though his parenting style could was regarded by some as rather unusual and somewhat liberal within the context of their society, it is his devotion to his children which moves him to develop their consciences, transmitting his ideals of sympathy and understanding. The results are two children with an unbreakable firmness in ethics who can acknowledge the evil in the world while still believing in the goodness of people. Atticus educates his children with patience understanding and honesty. This moves him to treat them as equals, and thus, as adults, answering their questions accordingly. This is possibly the reason why he insists on having them call him Atticus. This way, he takes advantage of every opportunity to pass on valuable lessons, without actually imposing rules. This is exemplified when Scout refuses to go to school. He teaches her that "(she) must obey the law", unlike the Ewells who only attended the first day, because "they had been the disgrace of Maycomb for three generations. None of then had done an honest day's work in his recollection". Though stating clearly that Mr. Ewell "will never change his ways", his children can return to school at any time; "when they show the faintest symptom of wanting an education". Atticus shoes Scout the Ewell children are not a lost cause, but at the same time explains her she must not underestimate them, regardless of their impoverished situation. Furthermore, through this example, Atticus gives a solid case of why she must attend school though being unfairly restricted from reading, so he cleverly agrees to keep reading to her every night. This shows Atticus' ability to put himself in his children's shoes and treat them as individuals instead of underestimating their learning capacity and reasoning as other parents would when limiting themselves to commanding their children. ...read more.

Atticus is able to value people not for the colour of their skin, but for the value of their hearts and has, for that reason, exposed Jem and Scout to black people without restrains from a very early age, showing them they deserve as much respect as any other person in Maycomb. Atticus is constantly defending the unfairness he sees in the world as we see when he agrees to become Tom Robinson's lawyer, even though this would signify a severe clash with the deep racial prejudice held by his community which causes subsequent mockery and disdain towards him. This is an opportunity for Atticus to impart in his children the valuable value of remaining firm to one's ideals and ignoring people's comments and remarks. Atticus wisely point out that "nigger lover" is just a phrase born in the ignorance of others to insult. He then, further teaches them that words like that should be in the same way be ignored so that the intentions and meaning behind it are lost. Most importantly, Atticus tells them to "hold (their) heads up high and keep (their) fists down", both after Scout fights Cecil Jacobs and Francis as well as when Jem is scorned by Mrs. Dubose. This is constructive principle for their character, as it guides them to be tolerant and to separate what others say and what they believe, being always true to what is really important: their opinion of themselves. Atticus also applies this lesson in his own life, as we appreciate when Scout asks him why he decided to defend Tom Robinson. He answers that if he hadn't he wouldn't be able to "hold up his head in town or "tell her or Jem not to do something again". Atticus he needs to follow his own ethics and values to maintain his dignity. Moreover, he does not judge his neighbour for her racist remarks and attitude but rather decides to forgive them and ignore them. ...read more.

Throughout the play, we can see a gradual development in her own character, product of learning Atticus' valuable lessons. We learn she has properly acquired Atticus' values as she applies them towards the end of the book. In such a way, she is able to comprehend Boo Radley is a human being and further appreciates him saving Jem's life andd agrees on covering his murder. This is the ultimate proof that as Scout grows; she will too become like her father, seeing the world from other point of view without conflicting her conscience and innocence. Atticus represents the novel's moral guide and conscience, but this is shown to the extent where he seems rather unrealistic. He serves his purpose in the novel as the epitome of morality and voice of wisdom, as his values and ethics are not limited to others' remarks or opinions, but his children's as well. He is strong and strict in his ways, and as such acts against acts of injustice, unlike those who, even though do not support them, just plainly ignore them. Even Harper Lee described Atticus as "a man of absolute integrity with as much good will and good humour as he is just and humane." All these values are not found in such degree commonly, especially by a man who has undergone the tragedy of losing his wife. His only flaw may be that he is too civilized to believe someone like Mr. Ewell may actually want to do harm consciously, and thus he remains innocent to other's dark intentions. Nevertheless, Atticus is a father whose unconditional care and pure love ensures not only the characters, but the reader, that any obstacles in their future will be overcomed. We end up feeling that all the dangers, compared to his unmeasured love, are minimized. We know he will do anything to protect his children and we have the certainty they will be safe, ending the novel with a steady sense of peace and safety. Marielle Alvino M. ...read more.