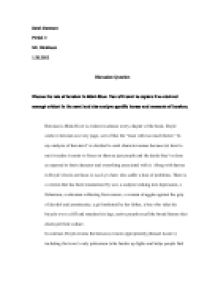 Discuss the role of heroism in Mink River. You will want to explore it as abstract concept evident in the novel and also analyze specific heroes and moments of heroism.

Sarah Swanson Period 3 Mr. Dickinson 1.20.2012 Discussion Question Discuss the role of heroism in Mink River. You will want to explore it as abstract concept evident in the novel and also analyze specific heroes and moments of heroism. Heroism is Mink River is evident in almost every chapter of the book. Doyle slathers heroism on every page, sort of like the "toast with too much butter." In my analysis of heroism I've decided to omit character names because (at least to me) it makes it easier to focus on them as just people and the deeds they've done as opposed to their character and everything associated with it. Along with heroes in Doyle's book are those in need of a hero who suffer a host of problems. There is a veteran that has been traumatized by war, a sculptor sinking into depression, a fisherman, a salesman withering from cancer, a woman struggles against the grip of alcohol and promiscuity, a girl molested by her father, a boy who rides his bicycle over a cliff and smashes his legs, native people recall the brutal history that destroyed their culture. In contrast, Doyle creates the heroes (or more appropriately phrased healers) ...read more.

By doing this one accepts that the lack of grammar is part of the rhythm created through the writing. Other examples of "poem-like" writing are Doyle's words that are occasionally mashed together like "bittersweetorangeyellowacidic" taste of a salmonberry, as well as the use of "Worried Man," as a title for no apparent reason. The best part about Doyle's storytelling style is his skill at illustrating the unique mannerisms of people and their quirks that make them so believable. Also, it is extremely obvious that Doyle loves the act of story telling, especially when he writes "[I]t would take a million years to tell a millionth of their lives and we don't have the time, worse luck, for their stories are riveting and glorious and searing," (no specific page number because I unfortunately read this on my mom's kindle from her ipod which has no page numbers...which is frustrating. However, if you really would like the page number I could certainly find and email it...but that might be excessive). As for Mink River itself it basically is a book of storytelling. Half the book or more gives readers anechdotes, whether obvious or subtle, of people's lifes. This is part of the poetic writing in the book, as it is much less focused on the plot of the ...read more.

so hard her cheeks and stomach hurt, and she stands up, laughing, to stretch her stomach, as she turns around and reaches out a hand to touch his face her water breaks" Overall youth means happiness Daniel walks again is a symbol of strength and youth as well as coming of age "Can I walk now please? Can you? You all right? Yes. Sure? Yes." Passing of Wisdom from elderly to the young "But I believe it is an error to wonder about what you do not know" WM talking about Cedar "Children are important, and serving each other is important" governor speech to Miguel "well son, says Cedar to Nicholas, I've drawn up the papers for you to quietly take over the Department" Heroes become the Helpless and Vice-Versa Maple Head taking care of Worried Man "Getting Worried Man out of the robosuit at night was an adventure, and it took Maple Head a few nights to figure out the drill, but she got good at it right quick and could peel him like a banana and squirt him into the bed.." 304 Immersion of Natue to youth "the baby slides smoothly out of sara onto the sweet soil at the edge of the garden" symbolic that nature will always play part in future generation ...read more.