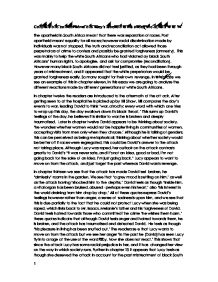 Disgrace. Compare and contrast David and Lucys reaction to the attack in chapters 12 to 14

Compare and contrast David and Lucy's reaction to the attack in chapters 12 to 14 The apartheid in South Africa meant that there was separation of races. Post apartheid meant equality for all races; however racial discrimination made by individuals was not stopped. The truth and reconciliation act allowed those perpetrators of crime to confess and possibly be granted forgiveness (amnesty). This was mainly to help the white South Africans who had violated ay black South Africans' human rights, to apologise, and ask for compromise (reconciliation). However many black South Africans did not feel justified, as they had been through years of mistreatment, and it appeared that the white perpetrators would be granted forgiveness easily. So many sought for their own revenge, in Disgrace we see an example of this in chapter eleven. In this essay we are going to analyse the different reactions made by different generations of white South Africans. In chapter twelve the readers are introduced to the aftermath of the attack. After getting seen to at the hospital he is picked up by Bill Shaw, Bill compares the day's events to war, leading David to think 'war, atrocity: every word with which one tries to wrap up this day, the day swallows down its black throat.' ...read more.

We see that 'a grey mood is settling on him,' as well as the attack having 'shocked him to the depths,' David feels as though 'inside him, a vital organ has been bruised, abused- perhaps even his heart,' also 'his interest in the world draining from him drop by drop.' All of these quotes express David's feelings however rather than anger, a sense of sadness is upon him, and we see that this is due partially to the fact that he could not protect Lucy when she was being raped, which links back to Mr. Isaacs, Melanie's father and his forgiveness of David. David feels hatred towards those who committed the crime 'he wishes them harm,' these quotes indicate that although David feels anger and hatred towards them, he is broken, and the attack has traumatised and defeated David. He feels as though 'his pleasure in living has been snuffed out.' The readers see that Lucy wants to move on from the attack but we see her anger 'In the past he (David) has seen Lucy fly into a rage at the use of the word boy. ...read more.

Just like the old days: baas en Klaas (servant).' This goes back to the apartheid, when whites were treated in a much more superior sense. At the beginning of the novel we learnt that David was to stuck in his ways, reluctant to change, and this quote emphasises that. He still believes it should be that way, the attack encouraged his belief. To conclude I would say that David and Lucy's reaction to the attacks could not contrast more. Where David appeared to be scared and Lucy put on the brave front, David was the one who was strong for them both, going to the market etc, whereas Lucy was finding life after the attack very difficult, 'her thumb in her mouth like a child.' However, Lucy does not want the attack to be known to the public, she wants to move on, forget the past, but David wanted revenge on the attackers. Lucy's attitude towards the attack suggests that she felt guilty for the mistreatment of blacks and felt this was her punishment, whereas David's beliefs that change shouldn't happen were stressed by the attack. ?? ?? ?? ?? 1 ...read more.