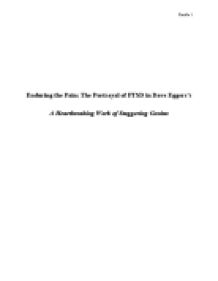 event and lives it over again.?[12] Eggers not only experiences flashbacks, but is also left with the lingering memory of his parents? death. When recalling his father in a flashback, Eggers remembers, ?He had lost so much weight. A car went by, a grey blur. She waited for him to get up.?[13] In the next moment, though, his thoughts switch back to his mother. He goes on then to continue his monologue, continuing with how her stomach had ?grown like a pumpkin.?[14] These haphazard shifts display Eggers?s complete submission to these flashbacks. Thinking about his parents becomes a habit for Eggers, and trying to forget is no longer even an option. The vivid memories that are unexpectedly propelled into Eggers?s consciousness create a painful chaos in which Eggers attempts to detangle. By writing, Eggers is able to face his flashbacks directly. In his writing, ?literary gamesmanship and self-consciousness are trained on life's most unendurable experience, used to examine memory too scorching to stare at, as one views an eclipse by projecting sunlight onto paper through a pinhole."[15] By analyzing his past, Eggers is able to confront his flashbacks directly, without being caught vulnerable by his emotions. His writing is a form of catharsis. By displaying his flashbacks in the public, dealing with the pain of what happened is now less of a surprise, and Eggers can make sense of what has happened. As another example of PTSD in his writing, Eggers?s sardonic humor plays a chief role in his dealing with trauma. Throughout his novel, Eggers uses humor to lighten the mood of his otherwise stress-filled writing. By using comedy, the intense experiences and absolute heartbreak Eggers experiences are morphed into casual incidents. An explanation for ?one of the reasons humor comes into play in tragic circumstance is that the two modes are related: The tragic is suffering contradiction, the comic the painless one. ...read more.

Externally, Eggers resembles nothing new, but internally, the death of his parents destroys much of what he once was. Eggers remains true to reality in his memoir, depicting the lack of positives that come with death. Writing his novel in direct correlation to PTSD, Eggers illustrates how death in society is often underestimated. Those who have been impacted are never again the same, and can never forget what happened. Repressing memories is an easy task; it?s the erasing that is impossible. With death comes grief, and with grief comes pain. And even with the pain, ?I am willing and I?ll stand before you and I?ll raise my arms and give you my chest and throat and wait.?[28] That?s exactly what Eggers?s life culminates to: waiting. He passionately desires to be the change in the world, to make his life and Toph?s life infinitely better. His attempt does not fail, but the life he lives is still a constant struggle. Eggers cannot move past the death of his parents; he is still trapped in the world of what could have been. With the present passing by him, Eggers is still suffering from PTSD. His inability to completely heal from his losses leaves the reader with an immense sense of dissatisfaction. This unresolved conflict is the point that Eggers is trying to prove in his memoir. By recounting his past, Eggers is displaying the long-lasting effects of death, and the mental position of those who suffer from losses. By publishing the private thoughts of one who has lost, outsiders are transformed into the involved. Readers are given a closer glimpse at what it is to lose. Eggers brings to the forefront the issues that plague one after loss and the incalculable pain that comes with death. For Eggers, the goal is not to narrate a story of sadness which will receive pity, but instead, to enlighten those who have not dealt with loss in their lives, and in the process, discover his own path to healing as well. ...read more.