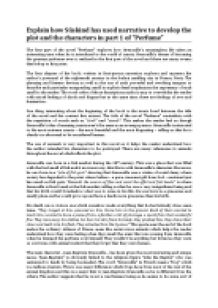 ï»¿Explain how Süskind has used narrative to develop the plot and the characters in part 1 of “Perfume” ________________ The first part of the novel “Perfume” explores how Grenouille’s meaningless life takes an interesting turn when he is introduced to the world of scents. Grenouille’s dream of becoming the greatest perfumer ever is realised in the first part of the novel and there are many events that led up to this point. The first chapter of the book, written in first-person narration explores and captures the author's portrayal of the eighteenth century in the foulest smelling city in France, Paris. The phrasing and literary devices as well as the use of such powerful and revolting imagery to describe each particular unappealing smell in explicit detail emphasises the supremacy of each smell to the reader. The word order of these descriptions make is easy to overwhelm the reader with mixed feelings of shock and disgust but at the same time, there are feelings of awe and fascination. One thing interesting about the beginning of the book is the ironic bond between the title of the novel and the content this extract. The title of the novel “Perfume” contradicts with the repetition of words such as “stink” and “stench”. This makes the reader feel as though Grenouille’s idea of amazing scents aren’t the same as an average person. Grenouille is attracted to the most extreme scents – the most beautiful and the most disgusting – telling us that he is clearly too abnormal to be considered human. ...read more.

Chapter 8 marks the beginning of the murders that Grenouille commits. It begins on September 1, 1753, the anniversary of King Louis XV's coronation. This already makes the chapter seem special and significant. Grenouille is present for the fireworks on the right bank of the Seine, but he is not interested in watching them. He has come to see if he can find something new to smell. Here, Süskind seems to emphasise the fact that Grenouille is abnormal as he has come to seek out something that others can’t instead of enjoy the firework display that everyone else is present for. Grenouille, however, does catch a scent: “rolling down the rue de Seine like a ribbon, unmistakably clear, and yet as before very delicate and very fine”. This line shows how rare it is for a scent like this to attract him. Grenouille seems to be very selective of the scents that he deems to be worthy and the way that the narrator describes this scent shows us that he approves and wants more. There were more descriptions of this scent: “This scent was inconceivable, indescribable, could not be categorised in any way – it really not ought to exist” and also: “It was only purer, and in its augmented purity, it took on an even greater power of attraction. Grenouille walked with no will of his own.” These two quotes show us how unique this scent really is. It is everything to him and his nose is leading him to it in order to find where it was coming from. ...read more.

Baldini the perfumer dies when his house falls into the river after the bridge collapses, the very night after Grenouille leaves him. All of these deaths suggest that Grenouille carries a curse. He is practically inhuman and almost a demon as he is scentless, unloved, and alone. Everything else he touches withers or dies. Grenouille, a person without sympathy for or from anyone beyond his childhood, is an unstoppable and unpredictable force of death and destruction. This story focuses on evil, particularly evil in human beings. The examination of ?evil? is unemotional and meant to come across as a serious analysis and so I feel as though this story is written in a scientific way. The structure is similar to that of historical writings, with an omniscient narrator and very little dialogue. The scenes in Grenouille?s life are ?recorded? instead of experienced. I think that if the story were narrated by Grenouille, the reader would be likely to sympathize with him as we would actually know his real thoughts and feelings. ?Perfume? is a unique coming of age story. It demonstrates how a man grows and matures as a result of his nature and the environment he is raised in. To demonstrate this theme, the novel is structured in four parts, like four stages of development: youth, adolescence, adulthood, and death. The first section shows Grenouille as a young child, learning to interact with his surroundings; then the second section demonstrates his interaction with society. The third section shows him finding a path in life and the last section shows him trying to flee from his inevitable death. ...read more.