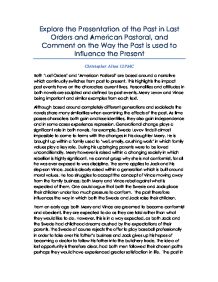 Explore the Presentation of the Past in &quot;Last Orders&quot; and &quot;American Pastoral&quot;, and Comment on the Way the Past is used to Influence the Present

Explore the Presentation of the Past in Last Orders and American Pastoral, and Comment on the Way the Past is used to Influence the Present

Both ‘Last Orders’ and ‘American Pastoral’ are based around a narrative which continually switches from past to present. This highlights the impact past events have on the characters current lives. Personalities and attitudes in both novels are sculpted and defined by past events, Merry Levov and Vince being important and similar examples from each text.

Although based around completely different generations and sociolects the novels share many similarities when examining the effects of the past. As time passes characters both gain and lose identities, they also gain independence and in some cases experience repression. Generational change plays a significant role in both novels. For example, Swede Levov finds it almost impossible to come to terms with the changes in his daughter Merry. He is brought up within a family used to ‘wet, smelly, crushing work’ in which family values play a key role. During his upbringing parents were to be loved unconditionally. Merry however is raised within a changing society in which rebellion is highly significant. He cannot grasp why she is not conformist, for all he was ever exposed to was discipline. The same applies to Jack and his step-son Vince. Jack is clearly raised within a generation which is built around moral values. He too struggles to accept the concept of Vince moving away from the family business; both Merry and Vince rebel against what is expected of them. One could argue that both the Swede and Jack place their children under too much pressure to conform.  The past therefore influences the way in which both the Swede and Jack raise their children.

From an early age both Merry and Vince are groomed to become conformist and obedient, they are expected to do as they are told rather than what they would like to do. However, this is in a way expected, as both Jack and the Swede had childhood dreams crushed by the expectations of their parents. The Swede of course rejects the offer to play baseball professionally in order to take over his father’s business and Jack gives up his hopes of becoming a doctor to follow his father into the butchery trade. The idea of lost opportunity is therefore clear, had both men followed their chosen paths perhaps they would have experienced greater satisfaction in life.  The past in this case has an unknown effect on the present, as it can never be changed. However, it is clear that those opportunities were allowed to pass by, something which both the Swede and Jack are unable to change.

In the case of Merry and Vince, one must question whether their past has a much greater impact on their actions than is first apparent. Merry is brought up under immense pressure from her mother, her stutter is continually criticised and the Swede is forever pushing her toward solutions. One could argue that the bombing of the post office is perhaps not completely anti-America, but more anti-society and rebellion against her father. The way in which she is treated in the past perhaps pushes her toward a destructive future. The continual attempts to ‘fix’ her lead to the detonation of her parent’s lives, perhaps this is truly ‘just what she had in mind’.  Vince makes the decision to abandon Jack and enter the motor trade rather than the ‘family business’. Although this may have simply been due to his hatred of the smell of meat, one could argue that it stems from him never actually feeling part of the family itself. Amy, his step mother, longs for a daughter and Vince is clearly pushed aside during his childhood in order to make room for Sally. Therefore these past events lead him to distance himself from the family in the future, creating his own business which acts as an alternative.

In both ‘Last Orders’ and ‘American Pastoral’ the characters look back on their pasts in different ways. For some, such as Dawn, the past is something to be forgotten. Yet for others such as Lenny and Vic it is something to look back on with pride and sorrow. Nostalgia certainly plays a huge role in ‘Last Orders’, the majority of the characters dwell substantially on past events such as their roles in the war or ‘better days’ in the past. Vic is perhaps the best example of a character content with life, yet almost to a degree where he is left with nothing to achieve. He has clearly lived a full life, serving in the Navy for many years during the war, yet has come to a point where his past is ever more interesting that his present or his future. Zuckerman is an interesting character to compare to Vic. He appears to relish his past rather than his future, preferring to look back upon his glory days at high school where he once was spoken to by ‘the God’ that was the Swede. Both characters seem to have a vibrant past, yet a desolate present. Dawn on the other hand is completely different. It would appear for her outrunning her past is of high priority. Her time as ‘Miss New Jersey’ haunts her, rather than basking in the glory of it, she hides away. One could argue that her past life has a huge impact on her present existence, she moves from one extreme to the other, going from beauty queen to devoted farmer. The drastic change is perhaps caused by her fear of forever being overshadowed by her reputation. The past therefore limits her hugely as she cannot live her life in her own desired manner.

The past can also corrupt characters beyond recognition. This appears to be relevant when examining the characters of Jerry and Lenny. In the case of Jerry his present is hugely influenced by a past in which he was forever overshadowed. The fact that ‘the smaller Levov had been endlessly compared’ to his older brother, the Swede, clearly has a major impact on the man he grows up to be. He is left extremely bitter and lacks compassion. When he speaks of the Swede and the problems with Merry he oversimplifies everything. During a conversation with Zuckerman he states ‘why is he crying if she’s dead?’ His past means that his is unable to understand compassion and the way in which a father loves his daughter. It can therefore be argued that Jerry’s past has had a devastating impact on his present self, leaving him angry and bitter, lack of a loving family damages him hugely. The same applies to Lenny. Throughout ‘Last Orders’ he is described as a ‘stirrer’. This appears to stem from his lack of self esteem and dissatisfaction with his own life. Like Jerry he comes from a past in which he was made to feel inadequate. He was always unable to provide for his daughter in the way Jack and Amy were able to. During her childhood Lenny was unable to take his daughter to the beach, she instead travelled with Vince and his parents. This was clearly a sore point for Lenny, and it would seem that there was a considerable amount of resentment; he states that ‘we’d have taken her ourselves, only we didn’t have the train fare, and we didn’t have no motor, of course’. It therefore seems clear that in both cases past repression leads to bitterness and anger. Both Lenny and Jerry are left unable to explain their bitterness, and are therefore are unable to feel compassion and self satisfaction.

In conclusion it would seem that the past does indeed have a huge impact on the present in both novels. Repression leads to rebellion and nostalgia leads to monotony. The past is presented as something to both hide from yet also shelter within.