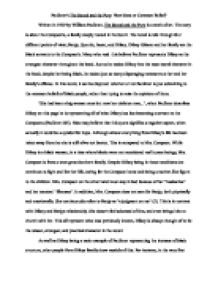 Faulkner's The Sound and the Fury: New Ideas or Common Belief?

Faulkner's The Sound and the Fury: New Ideas or Common Belief? Written in 1929 by William Faulkner, The Sound and the Fury is a work of art. The story is about the Compson's, a family deeply rooted in the South. The novel is told through four different points of view; Benjy, Quentin, Jason, and Dilsey. Dilsey Gibson and her family are the black servants to the Compson's. Many who read this believe Faulkner represents Dilsey as the strongest character throughout the book. Just as he makes Dilsey into the most moral character in the book, despite her being black, he makes just as many disparaging comments at her and her family's offense. In this novel, it can be disputed whether or not Faulkner is just submitting to the common beliefs of black people, rather than trying to raise the opinions of them. "She had been a big woman once but now her skeleton rose...", when Faulkner describes Dilsey on this page he is representing all of what Dilsey has lost becoming a servant to the Compsons (Faulkner 265). ...read more.

This all represent what was previously known, Dilsey is always thought of to be the wisest, strongest, and practical character in the novel. As well as Dilsey being a main example of Faulkner representing the increase of black structure, other people from Dileys family show models of this. For instance, in the very first page of the book Luster, a boy probably half the age of Benjy, is taking care of him. One must wonder where Benjy's "real" family is. In continuation, we see in flashbacks that Versh and T.P. also take care of Benjy on multiple occasions. These situations can also relate to an event from the previous paragraph. Mrs. Compson is too embarrassed to take Benjy to church with her, yet Dilsey gladly takes him with her. A final example, could be when Benjy flashes back to a scene from 1910, Roskus says "Taint no luck on this place..." (29). From this conversation between Dilsey and her husband Roskus, one can deduct that Faulkner is using this as a way to allude to the fact that the servants are more aware to the Compsons downfall then they themselves are. ...read more.

In these examples it can be seen that Faulkner may be illustrating what he has grown up around not trying to change it. Finally, there is the case of the Dilsey section. There are two arguments concerning this, the first one being that it is a sign of hope. With Dilsey being the strongest character, ending the novel with the focus on her could be a symbol for a new beginning. The opposing argument to this is based on the fact that the first three section are narrated by the character they focus on. While the Dilsey section focuses mainly on Dilsey, Faulkner is actually the narrator in this section. This decision of his could be viewed as Faulkner's idea that a black persons thoughts aren't worth reading/writing about. In retrospect, Faulkner's writing of this novel can have different interpretations. One being that of optimism for the south, the other solely on the negative aspects. Whatever Faulkner's motifs behind The Sound and the Fury, it can't be argued that this novel is one of the best written in literature. (858 Words) ...read more.