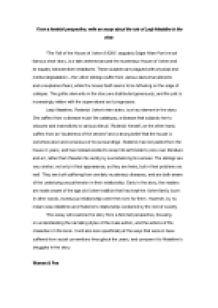 ﻿From a feminist perspective, write an essay about the role of Lady Madeline in the story. ?The Fall of the House of Usher (1939)?, arguably Edgar Allan Poe?s most famous short story, is a tale centered around the mysterious House of Usher and its equally indiscernible inhabitants. These subjects are plagued with physical and mental degradation ? the Usher siblings suffer from various abnormal ailments and unexplained fears, while the house itself seems to be tethering on the edge of collapse. The gothic elements in the story are distributed generously, and the plot is increasingly ridden with the supernatural as it progresses. Lady Madeline, Roderick Usher?s twin sister, is a key element in the story. She suffers from a disease much like catalepsy, a disease that subjects her to seizures and insensitivity to various stimuli. Roderick himself, on the other hand, suffers from an ?acuteness of the senses? and a strong belief that the house is somehow alive and conscious of its surroundings. Roderick has not parted from the house in years, and has instead elected to keep himself inside to pore over literature and art, rather than threaten his sanity by overwhelming his senses. The siblings are very similar, not only in their appearance, as they are twins, but in their problems as well. They are both suffering from similarly mysterious diseases, and are both aware of the underlying sexual tension in their relationship. ...read more.

At that time, women were expected to adhere to certain well-defined virtues, centered around the virtures of submissiveness and domesticity. To some extent, a woman?s value depended quite largely on her physical attributes. This refers not only her physique, but also to her abilities in carrying out household tasks. Women were traditionally seen as homemakers ? people in charge of matters in the household, not outside. Men, of course, were seen as the mind and intellect of the household, and the one qualified to receive an education and work in the outside world. A woman?s mental ability was regarded as essentially limited to superficial sensing, while a man would have been seen as the one responsible for complex thought and reflection in a household. In a way, Madeline?s suppression by her twin brother and the way she generally presents herself reflects this. Madeline does not speak, and simply obeys the orders of everyone else in the house. Roderick, on the other hand, always has the final word. This is exemplified once again the Roderick?s live burial of Madeline, in which Madeline could not do anything to change her fate. In the nineteenth century, the female daughter is seen as a critical supporting element of the family. She was expected to keep her aspirations and motivations rooted in maintaining and upholding the family and its name, from within the household. The way Madeline was buried, "half smothered in its oppressive atmosphere?, reflects the way she was smothered in Victorian society. ...read more.

In that final scene, while Roderick is "a victim to the terrors he had anticipated?, Madeline is fearful and intimidating, with her ?lofty? appearance and the blood on her clothes displaying the kind of struggles she has experienced and conquered. Perhaps this point offers insight into why this invoked fear in the readers of the era ? to see a woman assume such a powerful role would have seemed abnormally threatening. Another notable fact is that Roderick?s condition visibly deteriorates after the departure of Madeline from his daily life. It signifies that despite Madeline?s apparent weakness and low value, she does play a fundamental role in the Usher family. It suggests that she may have been a strong character from the start ? but the readers just cannot immediately see it as it is shrouded by the lack of attention on her and descriptions of her. In essense, a feminist criticism of ?The Fall of the House of Usher? reveals much about the nature of the characters and their relationships, as well as the reasons behind the circumstances and the characters? subsequent actions. A prominent theme stems from the context of the story, the Victorian era. By knowing how women were expected to act, we see the reasons why she was treated a certain way, and why her response was far from active. Madeline?s final actions, however, reflect a different side of the female role, adding a very interesting twist to the story. ...read more.