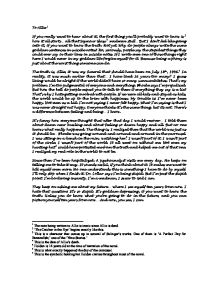 For this task, my main objective was to look at the world through the eyes of the fictional Holden Caulfield after the day of the carrousel but before Holdens present, at the end of the novel The Catcher in the Rye, by J.D. Salinger.

To Allie 1 If you really want to hear about it, the first thing you'll probably want to know is 2 how it all starts... all that Seymour Glass 3 madman stuff... But I don't feel like going into it, if you want to know the truth. Not yet. Why do people always write the same goddam sentences in suicide notes? No, seriously, people say the stupidest things they could ever say in their lives in suicide notes. If I wrote even one of those things right here I would never in my goddam life forgive myself for it. Because being a phony is just about the worst thing someone can do. The truth is, Allie, it was my funeral that should have been on July 18th, 1946.4 In reality, it was much earlier than that... I have lived 16 years too many!5 I guess living would be alright if the world didn't have so many sunnuvabitches. That's my problem. I'm too judgmental of everyone and everything. Phoebe says I'm prejudiced. But how the hell do people expect you to talk to them if everything they say is a lie? That's why I hate getting involved with people. If we were all kids and stayed as kids, the world would be up to the brim with happiness. My trouble is: I've never been happy. Not even as a kid. I'm not saying I never felt happy. What I'm saying is that I was never straight out happy. Everyone thinks it's the same thing, but its not. There's a difference between feeling and being... I know. It's funny how everyone thought that after that day I would recover... I told them about damn near bawling and about feeling so damn happy and all. But no one knows what really happened. The thing is, I realized then that the world was just as it should be... ...read more.

During the conversation we may see how she is concerned about him, as she asks him "How is school?" Holden feels awkward by these remarks; talking about all these problems would not only make him remember about them, but also realize that part of growing up is dealing with them. Another of the facets of Holden I want to show through this conversation is the way he relates to women. Different women have different effects on Holden. He is definitely attracted to many of them, even if he finds them phony. Yet, he is angry at himself for being attracted to people such as Sally Hayes. On the other hand, Jane is presented to us as an intelligent girl who has no trouble when it comes to dealing with life. Still, we may not relay much on what Holden tells us, as there are several clues that tell us that he may be exaggerating, first being the fact that we are only able to hear his perspective of the events, and also that by the end of the book he seems to be in a mental hospital. The Jane presented to us is much younger and has been idolized. However this does not disprove the fact that Holden seems to have strong feelings towards her, we often find him with "old Jane Gallagher back into [his] head". Although, H. Caulfield seems to be interested with her in a romantic manner, many times we find that actually he cares for her more as a sister, and wants to protect her from "going out with Stradlater". This is why he hates him so much. He is in some way jealous, although he tries to deny it, but his jealousy is due to the fact that Jane has gone out with Stradlater in the first place, and does not actually complain about him during their conversation. At the end we find that he wishes that she would go out with Stradlater again, like punishing her for growing up. ...read more.

* * Comments on how the task demonstrates an understanding of the cultural or literary option on which it is based. * In order to imitate Salinger's style of writing, it was essential to pick out the slang used by Holden, since these are the main words that make a difference in between his language and the other character's. Examples of these are word such as "goddam", "phonies", "wanna" and "dammit". Holden in someway represents a rebel teenager, always trying to break the rules and do the things he likes the most, no matter what the consequences are. 30-45 (for 2 courseworks) IB level 5 7 = 38-45 6 = 31-37 5 = 25-30 4 = 18-24 1 The note being written to Allie is ironic since Allie is dead. 2 'The Catcher in the Rye' begins exactly like this. 3 This is a character that comes up in several of Salinger's works. One of them is 'A Perfect Day for Bananafish;' one of the 'Nine Stories.' 4 This is the date of Allie's death. 5 Holden is 16 years old at the time of narration of the novel. 6 This is what exactly happened the day of the carrousel. 7 This is the symbolic hunting hat Holden carries throughout most of the novel. 8 Holden refers to his brother D.B. as a "prostitute" at the very beginning of the novel. 9 This is a reference to the conversation Holden has with Phoebe about this song. This is where the title of the novel comes from. 10 This is a reference to Holden's reflection on nuclear wars. 11 This is a reference to the conversation Holden has with Mr. Antolini about falling off a cliff (i.e. falling into depression) 12 "'Caul' is a membrane that covers the head of a fetus during birth." http://www.sparknotes.com/lit/catcher/ 09/08/07). Holden ironically signs "Holden Caul-field," thus indirectly creating the idea of him committing suicide but at the same time experiencing a type of rebirth. 13 This is a reference to Holden's reflection on someone writing "F--- you" on his tombstone. ...read more.