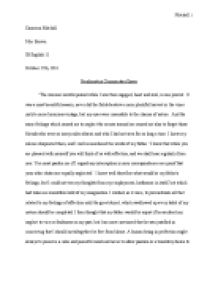 ﻿Mitchell Cameron Mitchell Mrs. Brown IB English 11 October 25th, 2011 Frankenstein Commentary Essay "The summer months passed while I was thus engaged, heart and soul, in one pursuit. It was a most beautiful season; never did the fields bestow a more plentiful harvest or the vines yield a more luxurious vintage, but my eyes were insensible to the charms of nature. And the same feelings which caused me to neglect the scenes around me caused me also to forget those friends who were so many miles absent, and who I had not seen for so long a time. I knew my silence disquieted them, and I well remembered the words of my father. 'I know that while you are pleased with yourself you will think of us with affection, and we shall hear regularly from you. You must pardon me if I regard any interruption in your correspondence as a proof that your other duties are equally neglected.' I knew well therefore what would be my father's feelings, but I could not tear my thoughts from my employment, loathsome in itself, but which had taken an irresistible hold of my imagination. ...read more.

When consumed with his occupation of creating the monster, Victor "shunned [his] fellow creatures as if [he] had been guilty of a crime" and "caused [him] also to forget those friends who were so many miles absent." By contrast, the Monster only wished to be with others and very much disliked his isolation?which is the very thing Victor needed. Furthermore, the Monster very much wanted to experience love whilst Victor wished to "procrastinate all that related to [his] feelings." This dichotomy between the two helps to simplify the question that many ask themselves when done with reading Frankenstein: "Who was the real Monster, Victor or his creation?" However, this idea culminates not when their differences are compared, but their similarities. The sole feeling each endured when trying to pursue their goal was that of pain. Victor described his duties as "loathsome" and when on the eve of completing his endeavor, he was stricken with a fierce fever. These punishments which Victor suffered seem quite just when considering the selfish act he had committed. On the other hand, the Monster only wished to do good and his pursuit of compassion and friendship was a necessity which he couldn't possibly avoid. ...read more.

It is these destructive passions that plague all of humanity which clouds the truth of what is before them. Therefore, in order to be free from these flaws which affects a human, one must transgress beyond of what it is to be human. Therefore, to be human is to be flawed, and it is these certain flaws Shelly uses to show what it is to be a monster. [a]This is a really great thesis statement. This is your thesis statement, right? What was the prompt that you had to write about? Make sure you?re addressing the prompt in your argument. [b]Great vocab here. Foils are a really sophisticated writer?s craft, we talked about them extensively in my AP Lit class senior year during the Hemingway unit. Did you come up with this yourself or was it necessary for the prompt that you use foils? Either way, great job. [c]Are you expected to cite your quotations? If so, you may want to include a page number here. If not, no worries. [d]This is a lot of great analysis! I don?t think you were over-analyzing at all. This interpretation is exactly the kind of stuff that teachers look for when reading over essays. [e]Great comparison [f]Does this need to be cited? ...read more.