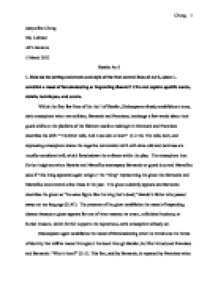 Hamlet Act I Questions and Answers

Jacqueline Chung Ms. Ledman AP Literature 5 March 2012 Hamlet Act I 1. How do the setting and events and style of the first several lines of Act I, scene 1, establish a mood of foreshadowing or impending disaster? Cite and explain specific words, details, techniques, and events. Within the first few lines of the Act I of Hamlet, Shakespeare already establishes a tense, dark atmosphere when two soldiers, Barnardo and Francisco, exchange a few words about their guard shifts on the platform of the Elsinore castle at midnight in Denmark and Francisco describes his shift: "'Tis bitter cold, And I am sick at heart" (I.i.7-8). The cold, dark, and depressing atmosphere shares the negative connotation with evil since cold and darkness are usually considered evil, which foreshadows the evilness within the play. The atmosphere then further heightens when Horatio and Marcellus accompany Barnardo on guard duty and Marcellus asks if "this thing appeared again tonight," the "thing" representing the ghost that Bernardo and Marcellus encountered a few times in the past. The ghost suddenly appears and Barnardo describes the ghost as "the same figure like the king that's dead," Hamlet's father who passed away not too long ago (I.i.41). The presence of the ghost establishes the mood of impending disaster because a ghost appears for one of three reasons: an omen, unfinished business, or buried treasure, which further supports the mysterious, eerie atmosphere already set. Shakespeare again establishes the mood of foreshadowing when he introduces the theme of identity that will be traced throughout the book through Hamlet, but first introduced Francisco and Barnardo: "Who's there?" (I.i.1). This line, said by Barnardo, is repeated by Francisco when Horatio and Marcellus come to join Barnardo in his shift. The questioning of identity foreshadows Hamlet's search for his manhood. 2. What evidence can you find in Claudius's speeches in Act I, scene 2 that show him to be self-protective, political, pragmatic, and hypocritical? ...read more.

it a fashion and a toy in blood, A violet in the youth...The perfume and suppliance of a minute, No more" (I.iii.5-9). Laertes basically calls Hamlet a player and says Hamlet's love will not last because metaphorically, the things he compares Hamlet to will not last as well. Laertes adheres to his belief by telling Ophelia to protect her chastity because Hamlet just wants to deflower her and then leave, and warns her of the dangers of sex by giving unappealing reasons of pregnancy and diverse social ranks: "But as this temple waxes, The inward service of the mind and soul Grows wide withal...His greatness weighed, his will is not his own. For he himself is subject to his birth" (I.iii.12-18). Ophelia offers a rebuttal to Laertes that reveal the double sexual standards of Elizabethan England: I shall the effect of this good lesson keep, As watchman to my heart. But, good my brother, Do not, as some ungracious pastors do, Show me the steep and thorny way to heaven; Whiles, like a puff'd and reckless libertine, Himself the primrose path of dalliance treads And recks no his own rede...(I.iii.45-51). Ophelia counteracts Laertes lecture on chastity by calling him a "puffed and reckless libertine," a male whore, who will leave for Paris soon do sleep around with women. By calling Laertes a whore, Ophelia reveals the double sexual standard of society as men who sleep around are being praised, yet women who sleep around, or have sex with another man other than her fianc�e or lover, are treated like dirt. The double sexual standard appears again when Polonius speaks to Ophelia about why she cannot trust Hamlet: "For Lord Hamlet, Believe so much in him that he is young, And with a larger tether may he walk Than may be given you" (I.iii.123-126). Polonius blatantly says Hamlet is allowed to whore around and sleep with other women, and that he probably will given the temptation, but Ophelia cannot have the same freedom he does. ...read more.

After Laertes leaves, Polonius speaks to Ophelia about her inability to see Hamlet's "fake" affection to her: "Affection pooh! You speak like a green girl" (I.iii.101). Polonius speaks to Ophelia as if she cannot know what love is by Hamlet and Polonius supports this claim by having a misogynistic attitude: "Marry, I will teach you. Think yourself a baby That you have ta'en these tenders for true pay Which are not sterling" (I.iii.104-105). Polonius treats Ophelia as if she does not know how to tell the "tenders" are fake, which Polonius believes they are. Then, Polonius forbids Ophelia from seeing him: "I would not, in plain terms, from this time forth Have you so slander any moment leisure As to give words or talk with the Lord Hamlet. Look to't, I charge you. Come your ways" (I.iii.131-135). Ophelia responds, "I shall obey, my lord," which demonstrates women's obligation to be obedient to the men in Elizabethan England, and this obedience, seen in later pages, seals Ophelia's fate to die. Along with establishing Ophelia's fate, the ghost of King Hamlet returns in Act I, scene 5 to reveal Gertrude's consequences for remarrying to Claudius: "Taint not thy mind, nor let thy soul contrive Against thy mother aught. Leave her to heaven And to those thorns that in her bosom lodge To prick and sting her" (I.v.85-88). Here, the ghost tells Hamlet to leave Gertrude alone and have her guilty conscience cause her downfall because of her disloyalty and disrespect to King Hamlet by her incestuous marriage to Claudius. Shakespeare uses the characters of Gertrude and Ophelia in this act to portray the unfair treatment of women during Elizabethan times because both women in this act of the play must obey their male counterparts without any explanation for their actions or desires. By giving the men in this play a misogynistic attitude with a double sexual standard and legitimizing the incest marriage, Shakespeare reveals the vulnerability and manipulation of women that causes them to be inferior and easily disrespected. ?? ?? ?? ?? 1 Chung ...read more.