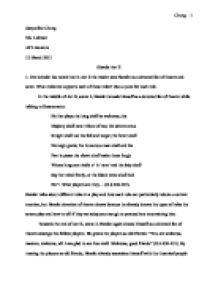 Jacqueline Chung Ms. Ledman AP Literature 12 March 2012 Hamlet Act II 1. One scholar has noted that in Act II the reader sees Hamlet as a devoted fan of theatre and actor. What evidence supports each of these roles? Use a quote for each role. In the middle of Act II, scene 2, Hamlet reveals himself as a devoted fan of theatre while talking to Rosencrantz: He that plays the king shall be welcome; his Majesty shall have tribute of me; the adventurous Knight shall use his foil and target; the lover shall Not sigh gratis; the humorous man shall end his Part in pease the clown shall make those laugh Whose lungs are tickle o' th' sere' and the lady shall Say her mind freely, or the blank verse shall halt For't. What players are they... (II.ii.328-335). Hamlet talks about different roles in a play and how each role can particularly rebuke a certain emotion, but Hamlet devotion of theatre shows because he already knows the types of roles the actors play and how to tell if they are adequate enough to proceed into entertaining him. Towards the end of Act II, scene 2, Hamlet again shows himself as a devoted fan of theatre amongst his fellow players. He greets the players as old friends: "You are welcome, masters, welcome, all. I am glad to see thee well. Welcome, good friends" (II.ii.430-431). ...read more.

The fact that Polonius says this epigram is ironic because Polonius just wasted his time denouncing the waste of time and that his wordy nonsense counteracts the epigram he said after. Polonius contradicts himself further by finally saying what he's found but also by being brief: "And tediousness the limbs and outward flourishes, I will be brief" (II.ii.91-92). After the empty talk Polonius gives, being brief is the last thing he would be. Also, Polonius self-criticizes and supports the irony set in this situation because he gave a wordy preface that later contrasted with the epigram. 5. Find a pun in Act II, and explain its double meanings and the relation to the speaker's intent and/or the theme of the play. When Hamlet enters in scene 2, he and Polonius exchange a few words and Hamlet elicits a pun, and an insult: "You are a fishmonger" (II.ii.174). Literally a fishmonger is a person that deals fish but sneaks his way to get more money by weighing the fish and putting a little extra weight on the fish so the customer can pay more for less. However, in this setting, Hamlet refers to Polonius as the fishmonger in the context of lying and deceit, especially since the word fishmonger also means pimp. Polonius ordered his daughter Ophelia to sever her relationship with Hamlet but then tells the king and queen Hamlet truly loves Ophelia, and Polonius uses Ophelia as "bait" to get Hamlet to confess what he knows and spy on him to further his political influence with the king and queen. ...read more.

The appearance of the ghost already sets a somber and opaque atmosphere, and Hamlet's revelation of his father's murder adds to it. After this encounter, Hamlet vows to get vengeance on Claudius. However Hamlet becomes cautious in his revenge in Act II, scene 2 when during his soliloquy for two reasons: Hamlet's problem of delay and his doubt of the ghost. In Hamlet's soliloquy, he castigates himself for not being a man of action and not taking vengeance on Claudius yet: "Yet I A dull and muddy-mettled rascal...Am I a coward?" (II.ii.577-582). By questioning himself, Hamlet actually becomes a man of thinking rather than action. Hamlet then hinders killing Claudius by doubting the ghost: "The spirit that I have seen May be a devil, and the devil hath power T' assume a pleasing shape" (II.ii.610-612). By doubting the ghost, Hamlet basically stalls at this point and his caution becomes more of a drag, especially when he announces that he will only find proof when he watches Claudius during the play the next day: "I have heard that guilty creatures sitting at a play Have by the very cunning of the seen Been struck so to the soul that presently They have proclaimed their malefactions" (II.ii.601-604). By using disease and rotting imagery to create the somber and drab atmosphere, Shakespeare portrays Hamlet as a man incapable of taking action and taking his vengeance on Claudius with images of sickness of Denmark and the appearance of the ghost. ?? ?? ?? ?? 1 Chung ...read more.