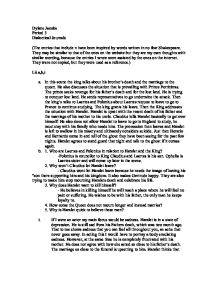 Dylane Jacobs Period 3 Dialectical Journals (The entries that include n have been inspired by words written in no fear Shakespeare. They may be similar to that of the ones on the website but they are my own thoughts with similar wording, because the entries I wrote were assisted by the ones on the internet. They were not copied, but they were used as a reference.) I.ii.a,b,i a. In this scene the king talks about his brother's death and the marriage to the queen. He also discusses the situation that is prevailing with Prince Fortinbras. The prince seeks revenge for his father's death and for the lost land. He is trying to conquer lost land. He sends representatives to go undermine the attack. Then the king's talks to Laertes and Polonius about Laertes request to leave to go to France to continue studying. The king grants his leave. Then the King addresses the situation with Hamlet. Hamlet is upset with the resent death of his father and the marriage of his mother to his uncle. Claudius tells Hamlet basically to get over himself. He also does not allow Hamlet to leave to go to England to study, he must stay with his family who needs him. The procession then leaves and Hamlet is left to wallow in his misery and ultimately considers suicide. Just then Horatio and Bernardo come in and tell of the ghost they have been seeing for the past few nights. Hamlet agrees to stand guard that night and talk to the ghost if it comes again. b. 1. Who are Laertes and Polonius in relation to Hamlet and the King? -Polonius is councilor to King Claudius and Laertes is his son. Ophelia is Laertes sister and will come up later in the scene. 2. Why won't Claudius let Hamlet leave? - Claudius wont let Hamlet leave because he needs the image of having his "son there supporting him and his kingdom. ...read more.

I know you love her; you can't have lost interest because nothing has placed in front of you that would have given you the opportunity to stray from your feeling for her. If you are not out of love with her than you yelling at her is not because of hate or anything in that area. Hamlet, you are trying to protect her from getting hurt. You know your life isn't going anywhere and there is a possibility of death in your future. I hope that is really why you said these things to her because she will hate you if they are not. d. "Get thee to a nunnery." This is significant because he is trying to get her out of harms way. She loves him and will follow him to the end and he needs to prevent that from happening. Tell her to get her to a nunnery is not to say she impure but that she needs to get out of the line of fire. He is protecting her from his inevitable fate. "I loved you not." Again this is significant because he is trying to save. It is better to break her heart now, than have you weeping over his dead body or witnessing the menace he is becoming. He knows the road ahead for him is dark and he does not want her to go through this. The hurt is easier now than it would be if he died. "O, what a noble mind is here o'erthrown." This is significant because Ophelia truly does love Hamlet. She is worried about who he has become. However, she is going to head his underlying meaning and not pursue him. But that doesn't mean she isn't worried about him. i. There is two ways to interpret this passage. It is full of double meanings. The first way this passage can be taken is that Hamlet is truly insane and mad at her. ...read more.

Hamlet then turns on Claudius and cuts him. He then forces Claudius to drink his poisonous wine. Claudius dies, then Hamlet is dying so he drinks the rest of the wine. He dies. Fortinbras comes in and Horatio explain what has just happened. Prince Fortinbras decided to give Hamlet a hero's death and the play ends. g. I want to talk about Prince Fortinbras and Prince Hamlet. They are strangers essentially. They have never meant, there was one instance where they missed each other by like 5 minutes. Yet at the end the Prince walks in and sees the vast amount of death but chooses to give Hamlet the hero's death and not anyone else. This is strange to me. Neither of the princes really have anything to do with each other, just their fathers. However, Hamlet is the man who gives Fortinbras back his land and adds a new kingdom to his armada. Hamlet gives more to Fortinbras than any other character and they never even met. That is a cool relationship. c. Hamlet you really aren't insane after all. You methodically thought how this was going to end without even knowing how Claudius and Laertes were going to exact there revenge. It is a shame you had to dies in the process. Hamlet I applaud you on your will to see through your plane even though I don't agree with revenge, however, you returned your fathers honor. You could have done it without killing your mother and Ophelia the two women who truly loved you. As you died I actually felt bad for you. Through this entire experience you went from sane to pretending to be insane, insane, to being completely sane and dying to bring honor to your father and to yourself. Fortinbras you are an amazing man. You had no relation to Hamlet yet you give him a warrior's burial when you didn't have to. Thank you. You deserve the land you got back after all the deaths. ...read more.