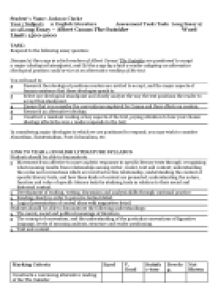 How adopting a philosophical standpoint can alter one's interpretation of the text &quot;The Outsider&quot; by Albert Camus: An absurdist and postcolonial reading of the text

?every man in [his] positioned had turned to God,? Meursault demonstrates the pointlessness in doing so, as he doesn?t ?have time.? Eventually, in reaction to the chaplains persistent attempts to convince him to believe something that ?doesn?t interest? him, something ?explodes? inside Meursault, and his indifferent tone turns to ?shouting at the top of [his] voice... pouring everything out at [the chaplain] from the bottom of [his] heart in a paroxysm of... anger.? Camus shifts the tone to highlight the anger Meursault feels towards what he perceives as the chaplain?s naivety in his religious beliefs. Meursault demonstrates that religion is just another attempt to lend meaning to a futile existence and that in reality, there is a ?benign indifference? in the world ? life is simply meaningless. In the wake of this pessimistic criticism, Camus presents an optimistic solution that suggests how to truly reach freedom and happiness in what is a chaotic universe with no inherent meaning. This optimistic solution is one that involves accepting the absurd nature of life and death.[8] In doing this, one learns to relish physical experiences, appreciate nature, and to live life in the present, for there is no time for the past and only death in the future.[9] Meursault, unconsciously, lives the life of the Absurd hero. Meursault has a ?profound passion? for truth, and in his afterword, Camus justifies that Meursault is ?far from lacking all sensibility,? despite being an outsider, and in a sense, ?agrees to die for the truth,? which makes him, in Camus? mind, ?the only Christ we deserve.? This obsession with truth allows Meursault to live in the present, nurture physical experiences, and appreciate the natural, without feeling the need to lend a false narrative to life. Meursault?s narration is indifferent, disjointed and disconnected, as Meursault only focuses on the present and the physical, so much so that he admits that at times, his ?physical needs distort his emotions.? This relishing of the physical is shown through tonal flourishes during the times ...read more.

French require to maintain their power in Algeria, and also, their inherent hatred toward the oppressed indigenous people.[25] Thus, it is revealed that the dynamic in colonised Algeria is one that ignores reconciliation and leads to a power struggle in which the French have the upper hand. To tie in with the discrimination of Arabs and the violent nature in which they are suppressed, comes a discriminatory legal system, which assists in the maintenance of the colonial social order. Meursault?s court case is focused on the fact he has ?no place in a society whose fundamental rules he ignored? in relation to the fact that he did not weep at his mothers funeral, not the fact that he murdered an Arab. The case almost ignores this fact entirely, and never calls an Arab as a witness despite the fact that they were the most informed about the murder. This goes to show that alongside physical assertion and military superiority, the French also rely on a discriminatory justice system to maintain their authority.[26] The repercussions of this are revealed when Meursault first visited prison and notices the prisoners were ?mostly Arab.?[27] Evidently, the social structure of this society completely deprives the Arabs of fundamental rights, and due to the discriminatory and ironically named ?justice system,? fairness and equality does not exist. From this, it can be surmised that by undertaking the lens of a postcolonial reader, vastly different meanings and insights can be made from the text. Under this perspective, Meursault is not seen as the hero of the text, but rather, an average French settler who presupposes his authority over Arabs in Algeria, resulting in racist and belittling treatment of the Arabs and a reliance on the use of violence, military supremacy and a discriminatory legal system to maintain this assumed power. This leads readers to the understanding that Meursault is in fact the villain of the text, which starkly contrasts what was intended by the author in presenting ?the only Christ we deserve. ...read more.