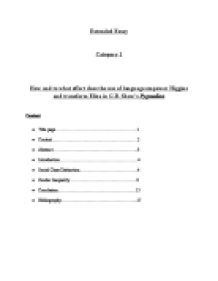 How and to what effect does the use of language empower Higgins and transform Eliza in G.B. Shaws Pygmalion?

Twenty years before Pygmalion was written George Grissing voiced the opinion of most of the people about the hopelessness of social progress. He stated: ?The London work girl is rarely capable of raising herself or being raised, to a place on life above that to which she was born; she cannot learn how to stand and sit and move like a woman bred to refinement, any more than she can fashion her tongue to graceful speech.?[15] ?Equality and inequality in social terms are thereby proven to be both extrinsic and subjective; this is clearly Shaw?s thesis from a socialist point of view?[16]. The people, who don?t meet these criteria, have no other option but to survive in the streets such as the corner of Tottenham Court Road. Most people unconsciously make preconceptions about a character taking into mind different attributes such as gender, age, level of education etc. Due to these preconceptions, people often assume the characters personality and class in context to their decisions. Leah Zuidema claims that ?these assumptions are not inconsequential thoughts. People act on their ideas, and, as a result, prejudice becomes active discrimination?[17] Eliza and Higgins are created to contrast each other entirely. The man is educated, and the woman is illiterate; the man is smart, and the woman is senseless; the man is reasonable, and the woman is emotional, etc. Higgins is a naturally selfish misogynistic celibate. Exactly how Eliza accuses him as one in the beginning of the play. "Oh, you've no feeling heart in you; you don't care for nothing but yourself."[18] Higgins being fluent in his speech is able to make statements such ?treating all people the same, as in heaven, where there are no third-class carriages?[19] at first leaves his audiences in awe but later they realize that these are only excuses for his crude remarks towards Eliza and his careless habit of dismissing manners. ...read more.

At this realization, Higgins has no choice but to accept the situation as what it is. His creation is not entirely his anymore; the creation has started to create itself. And that she is, in fact probably going to be a better creator for further more pupils to come. Higgins? has to accept Eliza as his equal or maybe more. Conclusion Although language plays a huge role in creating the identities of the two characters, in this play it does not completely overpower their identities. In terms of social class distinction, the language used by the characters of different societies created their identities only as a use of identifying their origins. The ironical part is that the lower class characters such as Eliza are much more humane and likeable to the audiences than the higher class characters such as Higgins. The language used by Higgins throughout the play is condescending and harsh which corrupts his identity and leads him to believe in the male dominated society. Thus, he is not a character in the favor of social progression. Eliza however is the opposite because she goes against the norms of the societies and decides to educate herself and build a new identity for herself. Although, her old identity is lost in the process of acquiring the new one which she, at times, regrets losing. A connection between the language and gender inequality creating an identity is solely based on the actions and reactions of the characters. The language aspect is only used to emphasize on their identities whereas their identities are also presumed by the characters use of language creating a paradox. Eliza, by the end of the play realizes that even though she achieves her ambitions of becoming a lady fit enough to work in a flower shop, she also has to carry the burden of a lady who is expected to be demure and innocent. The realization sets in when she realizes that as a common girl, she had more liberty to do as she wished without it being questioned whereas, as a lady, working itself is not acceptable. ...read more.