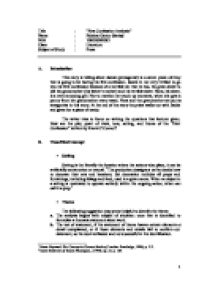 How are the plot, point of view, tone, setting, and theme of the First Confession written by Frank OConnor?

Title : "First Confession Analysis" Name : Pidekso Gentur Satriaji NIM : 108026000082 Class : Literature Subject of Study : Prose A. Introduction This story is telling about Jackie (protagonist) is a seven years old boy that is going to be having his first confession. Jackie in not very thrilled to go into his first confession because of a horrible sin that he has, his great desire to kill his grandmother (his father's mother) and his terrible sister. Nora, his sister, is a very annoying girl. Not to mention her stuck up moments, when she gets a penny from her grandmother every week. Nora and the grandmother are put as antagonists in this story. At the end of the story the priest walks out with Jackie and gives her a piece of candy. The writer tries to focus on writing the questions that lecturer given. How are the plot, point of view, tone, setting, and theme of the "First Confession" written by Frank O'Connor? B. Theoritical Concept * Setting Setting is the literally the location where the actions take place, it can be artificially construction or natural.1 The production desaigners ust be decide how ro decorate their sets and locations. Set decoration includes all props and furnishings, including foliage and food, used in a given scene. When an object in a setting is motivated to operate actively within the ongoing action, when can call it a prop.2 * Theme The following suggestion may prove helpful to identify the theme: a. ...read more.

(paragraph 2, page 1). Surely that he won't go to the church for the confession. The narrator is not very reliable; children will always blame someone else for their wrong doings, like Jackie blaming Nora for being so mean. The tone of the language is of a scared resentful seven years old boy. * Theme The theme of the story is hypocrisy and honesty. The perfect example of such a person is Nora in "First Confession" by Frank O'Connor. Nora's hypocrisy is shown in her actions, her speech, and in the way her brother Jackie thinks of her. Her strongest display of hypocrisy in speech comes in the last couple of sentences of the story. Nora says, "Some people have all the luck! 'Tis no advantage to anybody trying to be good. I might just as well be a sinner like you." This is both ironic and hypocritical because she has already shown by her actions and words that she is a sinner like anyone else, yet she has the nerve to claim she is trying to be good."(last paragraph, page 7). And the next theme is honesty. Jackie is honest to the priest, understanding how "the truth will set you free" * Plot The plot of this short story is forward. Beginning situation, when Nora and Jackie were in the street. But Jackie firstly ignorance her. ...read more.

This leads up to the confessional scene. D. Conclusion Setting is the literally the location where the actions take place, it can be artificially construction or natural. Setting in this story taken on the street, church, confession box, and yard of the church. Theme cannot be understood in isolation from the story which embodies it, but as with the other elements in a short story we have to talk about it as if it could be, the theme of the story is hypocrisy and honesty. Tone may be defined as the writers of speakers attitude towards his subject, his audience, or himself. It's the emotional coloring, or the emotional meaning, or the work and is an extremely important part of the full meaning, the tone of this short story/Jackie's language is mournful so the reader does feel his fear about the confession. Plot, then, refers to a series of interrelated events, during which some conflict or problems is resolved. Plot can be looked at for purposes of discussion as if isolated from the people concerned with those events and that conflict, the plot of "First Confession" begins when Jackie and his sister is on the street. Rising action, when Jackie was in the confession box, and he tell his first confession and the priest response him. Climax, when Jackie tell the priest about a reason to kill his grandmother. Falling action, when the priest tried to change Jackie's behavior. Resolution, when the priest gave Jackie an advice.The story is told in limited omniscient point of view. ...read more.