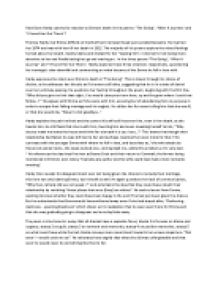 How Does Hardy convey his reaction to Emmas death in the poems: The Going, After A Journey and I Found Her Out There?

﻿How Does Hardy convey his reaction to Emma?s death in the poems: ?The Going?, ?After A Journey? and ?I Found Her Out There?? Thomas Hardy met Emma Gifford on the Northern Cornwall Coast just outside Boscastle. He married her 1874 and was with her till her death in 1912. The majority of his poems explore the mixed feelings he had about her death, mainly blame and disdain for her ?leaving him?, remorse for not being more attentive to her and finally letting her go and moving on. In the three poems ?The Going?, ?After A Journey? and ?I Found Her Out There?, Hardy explores those three emotions respectively, questioning his marriage?s slow downfall and commenting on what became of the Emma he fell in love with. Hardy expresses his shock over Emma?s death in ?The Going?. This is shown through his choice of diction, as he addresses her directly as if she were still alive, suggesting that he is in a state of denial over her untimely passing. He questions her harshly throughout the poem, beginning with the first line, ?Why did you give no hint that night?You would close your term here, up and be gone where I could not follow??? He argues with Emma as if she were with him, accusing her of abandoning him on purpose in order to escape their failing marriage and his neglect. ...read more.

He again compares this young Emma to the dead one, recalling her ?when [you] were all aglow, and not the thin ghost that [I[ now frailly follow!? He once again expresses the control Emma has over him in her death, prompting him to return to their ?old haunts? and reminding him of what they were. But contrary to ?The Going?, he feels no resentment toward her. Instead, he is merely lamenting her absence and mourning the loss of their youthful passion. ?I am just the same as when// Our days were a joy and our paths through flowers.? This can be interpreted as Hardy?s gentle insistence that it was Emma who changed, not him, once more portraying Hardy?s state of denial. Hardy again addresses Emma directly, accusing her of bringing him to their special places, asking if she is trying to send him a message; ?What have you now found to say of our past??? But this time he draws his own conclusions, claiming that she is ?leading him on to the spots [they] haunted together.? The use of the word ?haunt? in this poem is used both to describe the familiar places where they would stay as well as referencing the ?voiceless ghost?. ...read more.

guilt over unknowingly causing her death: ?So she does not sleep//By those haunted heights...? The ?haunted heights? mentioned here is an alliteration to denote fear; that is, Hardy always found the cliffs of Cornwall to be frightening, contrasting with Emma?s love for them. This is a reference to ?After A Journey? with Emma?s ?old haunts.? But in the final stanza of the poem, Hardy reaches what might be closure; while he accepts that he will always love Emma, and that she may always hold some control over him, he hopes that her spirit may move on and return to the shores of Cornwall. ?Yet her Shade maybe,//Will creep underground// Till it catch the sound// Of that western sea?And joy in its throbs// With the heart of a child.? This idea of Emma returning to Cornwall ?with the heart of a child? gives the impression that Hardy wishes for Emma to be reincarnated as a child. In all three poems Hardy is remembering Emma in different ways, some of which is a journey and some of it which is not. Hardy remembers the days of which they were together, until they drifted apart. What is interesting is that Hardy never mentions Emma?s names, always speaking directly to her of about her, showing that he is so ashamed and regrets the way he treated her. ...read more.