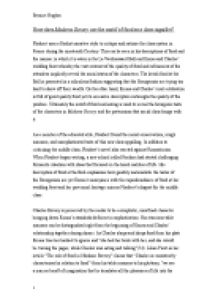 How does Madame Bovary use the motif of food as a class signifier?

﻿Bernice Hughes How does Madame Bovary use the motif of food as a class signifier? Flaubert uses a Realist narrative style to critique and satirise the class system in France during the nineteenth Century. This can be seen in his descriptions of food and the manner in which it is eaten in the La Vaubyessard Ball and Emma and Charles? wedding feast whereby the vast contrast of the quality of food and refinement of the attendees implicitly reveal the social status of the characters. The lavish food at the Ball is presented in a ridiculous fashion suggesting that the Bourgeoisie are trying too hard to show off their wealth. On the other hand, Emma and Charles? rural celebration is full of good quality food yet its excessive description outweighs the quality of the produce. Ultimately the motif of food and eating is used to reveal the bourgeois taste of the characters in Madame Bovary and the pretensions that social class brings with it. As a member of the educated elite, Flaubert found the moral conservatism, rough manners, and unsophisticated taste of this new class appalling. In addition to criticizing the middle class, Flaubert?s novel also reacted against Romanticism. When Flaubert began writing, a new school called Realism had started challenging Romantic idealism with ideas that focused on the harsh realities of life. His description of food at the Ball emphasises how gaudily materialistic the tastes of the Bourgeoisie are yet Emma?s annoyance with the superabundance of food at her wedding feast and her provincial heritage mirrors Flaubert?s disgust for the middle class. ...read more.

The wedding scene that takes up almost all of Chapter IV is a classic example of what makes Flaubert a realist. Emma?s prejudiced eyes intensify Flaubert?s realist attention to detail. The feast at the start is described by using quantities, for example ?six dishes?, ?three legs of mutton? and ?four chitterlings?. Flaubert is merely listing item after item, making the reader wonder how forty-three guests could finish all this food. Lilian Furst describes Emma?s wedding feast as ?the customary country beano?, a vulgar spread that is contrasted with the elegant banquet at La Vaubyessard, where the menu and presentation signify the refinement and elegance that Emma longs for, as opposed to the life that she actually lives.? The adjective ?customary? italicizes the impression that this wedding is a typical provincial wedding, standard to the normal traditions of the inhabitants. Here realism contrasts sharply with romanticism as the emphasis on Emma?s high expectations is ironically juxtaposed by her provincial heritage. The meat mentioned is good quality food; Charles spent most of his savings to ensure that the food would be very satisfying yet its elaboration adds a grotesque element to the feast. In addition, Flaubert only mentions in passing or in brief the contents of the table; instead he concentrates on the vast amounts of food prepared. To reflect the self-satisfied nature of the nineteenth-century Bourgeoisie, Madame Bovary makes repeated references to numbers, which accentuate the idea of quantity over quality. ...read more.

In the 19th Century, it was customary for a middle-class woman to put her gloves in her wine glass, to indicate abstinence from drinking wine that evening. Emma found such discipline shocking especially after witnessing many of the guests at her wedding feast getting drunk on rum or cider. A.S Byatt states ?The nineteenth century novel, however much it criticizes the bourgeoisie, is a bourgeois form that grew up with the prosperous middle classes who had time for reading, and were interested in precise discriminations of social relations and moral and immoral behaviour?[2] I agree that those reading the novel at the time were mostly middle-class Frenchmen and the difference in both social relations can only clearly be distinguished to a non-biased reader. Flaubert?s annoyance with the Bourgeoisie was effectively expressed to the Bourgeoisie reading the novel, and he made very clear his frustration with their unnecessary indulgences, specifically food. The quantity of food in Madame Bovary is so large and how it is eaten often reveals important character traits closely informing the reader of one?s social class. Clearly, food has been used as a symbol of wealth yet also a satire of social class system. From the realist picture of multitudes of meat at a country wedding to the fine food consumed at the grand dinner at La Vaubyessard, Emma?s disgust with her social class reflects Flaubert?s hatred for the middle class and his satirical descriptions of both occasions signify the vast difference between the Bourgeoisie and provincial people. ...read more.