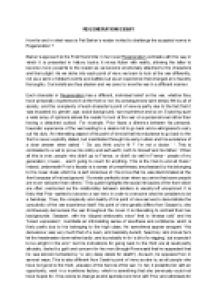 How far and in what ways is Pat Barkers reader invited to challenge the accepted norms in Regeneration ?

Transfer-Encoding: chunked ﻿REGENERATION ESSAY How far and in what ways is Pat Barker?s reader invited to challenge the accepted norms in Regeneration ? Barker?s approach to the First World War in her novel Regeneration contrasts with the way in which it is presented in history books: it mixes fiction with reality, allowing the latter to become more powerful to the reader as we become emotionally attached to the characters and their plight. As we delve into each point of view, we learn to look at the war differently, not as a serie of distant events and battles but as an experience that changed all of society thoroughly. Our beliefs are thus shaken and we come to view the war in a different manner. Each character in Regeneration has a different, individual belief on the war, whether they have personally experienced it at the front or not. Its consequences were deeply felt by all of society, and the complexity of each character?s point of view is partly due to the fact that it was impacted by gender, age, social background, war experience and so on. Exploring such a wide array of opinions allows the reader to look at the war on a personal level rather than having a detached outlook. For example, Prior faces a dilemma between his personal, traumatic experience of the war leading to a desire not to go back and a willingness to carry out his duty. ...read more.

As such, he opposes Prior in several ways. This is also different from Sarah?s point of view, as she is, as all people who have not gone to the front, unaware of the horrors of the war. To her, it presents her with an opportunity, work in a munitions factory, which is something that she previously could not have hoped for. This comes to change as she spends more time with Prior and witnesses for the first time the damage that the war has done: ?If the country demanded that price, then it should bloody well be prepared to look at the result.? Upon discovering what the country had tried to hid, she deeply feels the injustice that was done to the soldiers who had sacrificed part of themselves at the front. Each opinion is different, and serves to show the war in its complexity and ambiguity. As such, the reader?s opinion also becomes more balanced and nuanced as we overcome the sense of distance that we may feel towards the First World War. When we study the war, we often not only overlook soldiers? personal stories but also do not debate its purpose. Because we only study the facts and events that took place,and that the war, having finished almost a century ago, is not forgotten but less actual and debated than it was at the time, we do not wonder whether it was necessary or not. ...read more.

However, through the process of curing his patients, his values start to change. A particularly striking example of this woud be chapter fourteen, in which he criticizes the British people?s behavior to the horrors being perpetrated in France and of which they had barely known of, which he finds absurd: ?in trenches and dugouts and flooded shell-holes, the inheritors were dying, not one by one, while old men, and women of all ages, gathered together and sang hymns.?. This is a turning point in Rivers? characters as it shows a deep change in his beliefs, which is further demonstrated through his reaction when Burns attempts suicide: ?Nothing justifies this. Nothing nothing nothing.? His values are swayed and, by the end of the book, as he reflects on the transformation which he experienced throughout the novel, we cannot help but feel as if this change was mirrored by our own. We have also been, in our own way, affected by the soldiers? experience. Throughout Regeneration, Barker skilfully allies fiction with reality in order to craft a striking story. Our beliefs and opinions of the war are swayed as we discover the points of view of people who had truly lived through it and the consequences that it brought, and we come, upon faced with the suffering and horror, to question its necessity. We look back upon the events having discovered a newfound perspective, one that is not as spread as the detached study of the war: our vision is entirely changed. ...read more.